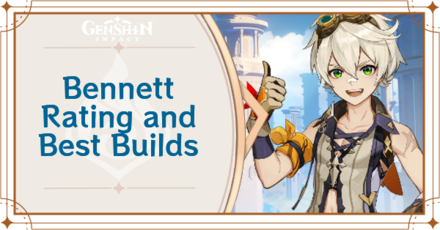 This build allows Bennett to not only buff the party's ATK, but will also deal above average Pyro DMG and reactions. Bennett's healing is still very effective in this build despite the lack of HP or Healing Bonus.

This Bennett build specializes in pure and effective healing to keep your party alive. Be sure to have his Base ATK really high to have a better ATK buff.

ATK increase is based on Bennett's Base ATK 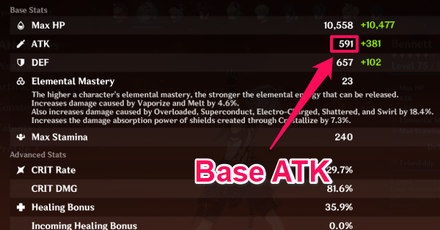 Bennett's ATK power increase from Fantastic Voyage is based on his Total Base ATK (white number), which can be found in the Stat Details. This is calculated by the sum of his own Base ATK plus his weapon's Base ATK.

Note that this ATK increase will not benefit from any increase in ATK stats from Artifacts.

Bennett's most essential talent is his Elemental Burst, which is why you should level it up to get more healing and ATK buffs. You can also upgrade his Elemental Skill so that Bennett can deal more DMG.

All Recommended Weapons for Bennett

C6 Not Recommended for Characters with Infusion

Be wary when activating Bennett's C6 Constellation, as it will convert melee characters' attacks into Pyro inside Bennett's Burst. This can be disadvantageous for Elemental or Physical characters like Ayaka or Eula, who rely on their own Element to deal DMG.

How to Use Bennett

Support the Party with Elemental Burst 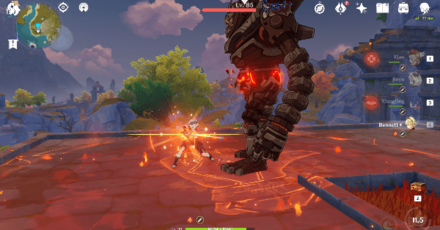 Bennett's Elemental Burst, Fantastic Voyage, gives the characters inside its radius an ATK bonus based on his base ATK. On top of this, this circle will heal the active character. Note that one instance of heal will tick up until 70% HP or above.

Fantastic Voyage is a powerful Elemental Burst that makes Bennett a must in most team compositions and rotations!

Look out behind you when using the Elemental Skill

Bennett's Elemental Skill, Passion Overload, is a spammable ability but has a huge drawback. After fully charging the skill, Bennett will get knocked backwards, which can have painful consequences.

The effect, however, is negated when done within the AoE created from Fantastic Voyage.

Bennett can do an additional attack during a level 1 charged Elemental Skill by pressing the normal attack button. This attack does an additional 135% damage from his attack value and is only unlocked after reaching his fourth constellation.

Useful to bring on Expeditions

Thanks to Bennett's Passive Talent, “It Should Be Safe...”, time consumed on an Expedition in Mondstadt will be reduced by 25%.

This will allow you to complete Expeditions earlier, and collect more materials. If you're going on an Expedition in Mondstadt, it's worth it to bring Bennett along. lities make her a great character to have in your party. As such, it is recommended to build her as a support, who can protect other characters in the field and potentially create Elemental Reactions.

It Should Be Safe...

How to Get Bennett

Bennett is currently available as a rate-up 4-Star character in Nahida's debut banner and Yoimiya's rerun banner in Version 3.2! It runs from November 2, 2022 until November 18, 2022! Razor and Noelle are also on rate-ups in Phase 1.

You can also get Bennett on all Standard Wish Banners except Beginner's Wish!

As a 4-star character, Bennett has a chance to appear in the Starglitter Exchange every month. He can be traded for 34 Masterless Starglitter.

Bennett's Thoughts About Others

See more comments (64 Comments)
Opinions about an article or post

In order for us to make the best articles possible, share your corrections, opinions, and thoughts about 「Bennett Rating and Best Builds | Genshin Impact」 with us!