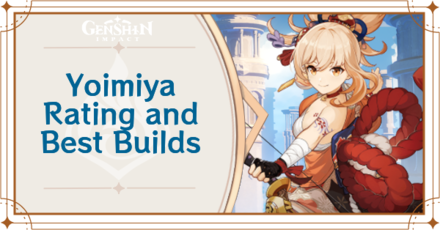 This is currently the best Main DPS build for Yoimiya. This is at a cost of not being able to use her Elemental Burst reliably off cooldown but is less of an issue for Sub-DPS characters that don't need the ATK% buff from Yoimiya's burst (like Yelan). Though the Echoes set could fix the issue, its rng nature makes it too unreliable.

This build for Yoimiya takes advantage of her Pyro-infused normal attacks from her Elemental Skill. It's slightly behind in damage compared to the Shimenawa set, but outshines it when using an Overloaded + Vaporize team comp. This also lets you use her Burst more!

Mixing different 2pc. sets together for Yoimiya can be a good middle ground when you don't want to farm for complete sets, especially if you already have perfect substats for each piece.

Normal Attacks are the primary source of Yoimiya's damage, so it should be maxed out first. Her Elemental Burst has more utility compared to her Elemental skill, but each should be leveled up somewhat equally.

All Recommended Weapons for Yoimiya

Yoimiya needs to be on-field to deal most of her damage. She will need to have good Sub-DPS teammates who can provide off-field damage with strong elemental application.

This Anemo Reverse Vaporize team will have Kazuha absorb Hydro in his Elemental Burst. After, swap to Thoma to apply pyro with his Elemental Burst and then swap back to Kazuha to use his Elemental Skill to Swirl Pyro. This is to ensure Yoimiya gets full Pyro Buffs from Kazuha's Viridescent Venerer Set.

This is a more free to play friendly team for Yoimiya's ideal team comp. Yun Jin can be replaced with Bennett if you need her somewhere else. This build also works wonders if you have Thoma at C6.

Overloaded and Vaporize Party for Yoimiya

This Yoimiya team comp focuses on dealing damage through elemental reactions, meaning the Crimson Witch set would be more of an ideal build for this party. Fischl and Xingqiu both scale their damage from ATK% and will appreciate the buffs provided by Yoimiya and Bennett. A C6 Fischl has incredible synergy with Yoimiya.

C2 Does the Most Damage

Unlocking Yoimiya's second constellation is a good stopping point for unlocking most of her potential. Her C6 may look tempting, but keep in mind that it is still rng dependent.

How to Use Yoimiya 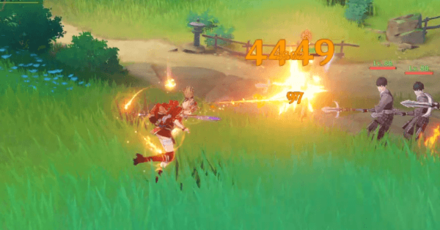 Yoimiya's Elemental Skill, Niwabi-Fire Dance, imbues her Normal Attacks with Pyro for a short period of time. Use this Talent as often as you can to get the most out of Yoimiya's Normal Attack DMG! 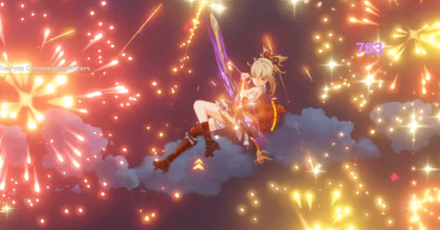 Yoimiya's Elemental Burst deals AoE Pyro DMG to surrounding enemies and marks one of the enemies hit with Aurous Blaze. It also buffs other party members' ATK% if her Passive Talent, Summer-Night's Dawn, is unlocked.

What is Aurous Blaze? 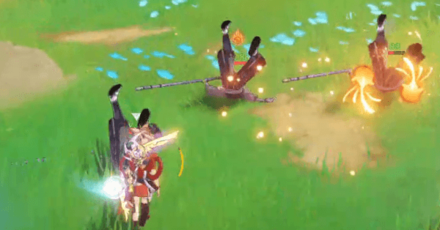 Excluding Yoimiya, all party members' attacks on an enemy marked with Aurous Blaze will deal AoE Pyro DMG. Once a marked enemy is defeated, the Aurous Blaze mark is then passed onto another nearby enemy. 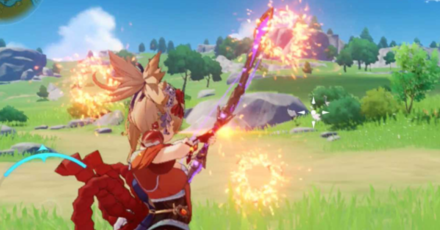 Yoimiya's Charged Attack Level 2 can home in on moving targets. This makes hunting down wild animals like birds and boars easier as even if they run away, they can still get hit by the arrows. 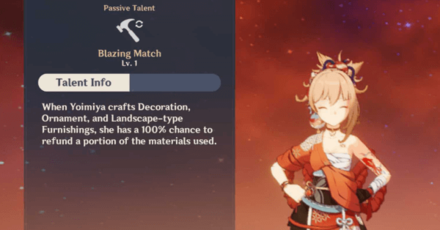 When Yoimiya is used to craft Furnishings, she can refund a portion of materials used. This makes the most out of your Furnishing crafting materials, and helps you save up to create more!
View Furnishing Crafting Guide

Tricks of the Trouble-Maker

How to Get Yoimiya

See more comments (108 Comments)
Opinions about an article or post

In order for us to make the best articles possible, share your corrections, opinions, and thoughts about 「Yoimiya Rating and Best Builds | Genshin Impact」 with us!