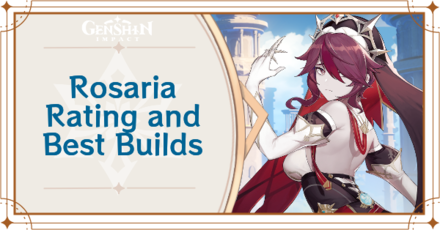 This Main DPS build for Rosaria uses her Normal Attacks as her main source of damage. The Crescent Pike will be one of the best weapons in this build, given how much Physical DMG stats and Normal Attack DMG bonus it provides.

This Sub-DPS Rosaria build focuses on dealing as much DMG as possible through her Elemental Burst. Rosaria should use a 4pc. Blizzard Strayer in Freeze teams while the Emblem of Severed Fate for others.

This Support build for Rosaria is all about providing as many buffs to her team as possible. Other than ensuring you have enough Energy Recharge to burst off-cooldown, try to reach 100% CRIT Rate to provide the team a 15% CRIT buff!

Rosaria's Elemental Burst will be used very often in any role, so prioritize leveling it, along with her Normal Attacks if you're using her as a Main DPS. If she's just a Sub-DPS, focus on her Elemental Skill after her Burst instead.

All Recommended Weapons for Rosaria

C2 for an Excellent Support

Rosaria's 2nd constellation provides an overall improvement for Rosaria both as a Sub-DPS and Support. Her 6th constellation is a huge benefit for Physical teams if you're lucky enough to unlock it!

How to Use Rosaria

Attack from Behind Using Elemental Skill

If you want Rosaria to deal the most damage possible, make sure you are using Rosaria's Elemental Skill, Ravaging Confession, to teleport behind an enemy and attack, as Rosaria's CRIT Rate will increase if you manage to use her skill on the enemy's back.

Keep in mind that you will not be able to teleport behind larger enemies like the Ruin Guards, so you have to manually go behind them and then use Rosaria's Elemental Skill for the passive to work.

When you unlock Rosaria's second passive talent, Shadow Samaritan, you will also be able to increase other party members' CRIT Rate after using Rosaria's Elemental Burst.

Great for Exploring at Night

When Rosaria is in your party, you will be able to move faster during the night (18:00 - 6:00). This allows for faster travel from one place to another when running on land.

Normal Attack: Spear of the Church

How to Get Rosaria

Rosaria is available at a normal rate on all Standard Wish Banners except Beginner's Wish. This means you can get her from Wanderlust Invocation, Epitome Invocation, and the current Character Event Wishes.

In order for us to make the best articles possible, share your corrections, opinions, and thoughts about 「Rosaria Rating and Best Builds | Genshin Impact」 with us!