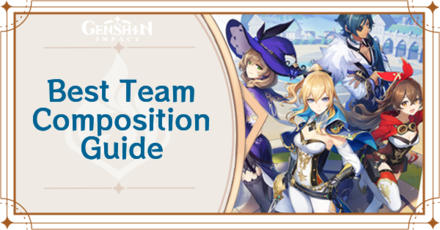 This is a guide for making the best team and party setup in Genshin Impact. We introduce the best party composition for each task including exploring areas, slaying field bosses, and more!

Thoma was teased by the Genshin Impact official Twitter, hinting that he'll be available in Version 2.2 update.

Use 2 DPS Characters in the party

Having 2 DPS in Kokomi's party is recommended. Kokomi's damage from her normal attack, charged attack, and Elemental Skill are more powerful during her burst. After her burst ends, you should switch over to your 2nd DPS to continue dealing high damage.

Kokomi has trouble with her narrow attack range, you can mitigate this issue by using Electro attacks to trigger Elemental Reactions. Raiden Shogun is a perfect match for this.

Have 2 DPS characters on the team

Two main DPS characters are recommended for when the Raiden Shogun's Elemental Burst ends. You can consistently deal massive damage this way!

This build focuses on Yoimiya's normal attacks. When her Elemental Skill is activated her normal attacks get imbued with Pyro, so before that happens you should switch to your sub-DPS and Support characters and activate their Skills or Bursts so that Yoimiya can trigger elemental reactions with her attacks.

Ayaka's Normal Attacks can be imbued with the Cryo Element, so it's best to set up reactions like Melt to greatly increase her damage output! Form a team with a Pyro character and an Elemental Mastery booster to make full use of Ayaka's skills.

Eula's Elemental Burst deals a huge amount of DMG depending on the number of attacks you land. Increase her Physical DMG output with Superconduct from Fischl.

We recommend having 2 DPS

Although Eula's normal attacks are strong, her Elemental Burst is the main source of huge DMG. It might take a while to charge up, so we recommend having an extra DPS on the team. An extra DPS will come in handy while waiting for her Burst to get ready.

Have Cryo Characters for Melt

Yanfei's Charged Attacks pack quite a punch — even more so when triggering Melt! Set up an Elemental Reaction with your party members and unleash Yanfei's Scarlet Seals with a powerful Charged Attack.

Hu Tao is a hard Pyro DPS, meaning she deals the most DMG with Pyro attacks. We recommend Cryo and Hydro characters to trigger ATK boosting Elemental Reactions!

We recommend having shields on Hu Tao because she needs to have low HP to maximize her skills. Having a shield would let you stay at the perfect HP level for a long amount of time!

With Xiao as your main DPS, you will want to keep him on the field for as long as you can without too much switching to maximize his damage. As such, he works great with characters that can provide shields, damage, and heals even when they're not on the field.

Before activating Xiao's Burst, it is a good strategy to switch to your other characters first and activate their Skills before switching back.

Melt and Vaporize All Foes

This party is centered around dealing massive amounts of burst damage by pairing Diluc with characters that can consistently set up Vaporize and Melt as they are the strongest Elemental Reactions available.

This build is centered around turning Klee into an unstoppable torrent of Vaporize and Melt damage. Mona and Sucrose are able to group enemies together and increase Klee's Elemental damage. Diona is able to provide shields and healing that can keep Klee in the fight for longer.

Drown Enemies in a Torrent of Elemental Skills

Control the Flow of Battle with Combat Flexibility.

Safely and Quickly Burst Down Enemies

This party is centered around allowing Ningguang to safely burst down enemies with their Elemental Burst by providing crowd control and shields between Zhongli and supplemental damage from Albedo. This party also takes full advantage of Zhongli's Elemental Skill to pulse Geo DMG through near by Geo Constructs. Ningguang's Screen also provides an additional Geo DMG boost, further amplifying total Geo DMG output.

This party is focused around using Xinyan as a brawler, keeping her in combat for as long as possible. Both Xinyan and Zhongli provide shields which allows for a more reckless playstyle to maximize Xinyan's physical damage output.

You can easily make your mark on Teyvat using only Story and free characters. This build focuses on Noelle as the tank and main DPS and using the Geo Element Traveler boost Noelle's damage when shielded through the Geo Elemental Resonance.

The combination of Noelle's high defense and healing capabilities along with Barbara's heal-focused talents, makes the party very hard to kill. Since Noelle's Elemental Burst scales with her DEF, it's easy to set up high damage combinations using Kaeya and Barbara to freeze enemies and then swapping Noelle to deal Shatter damage.

This party is perfect for Mondstadt exploration and material gathering. Venti's Elemental Skill can help lift your party to hard to reach areas, and combined with the movements speed increase and stamina use reduction from the Anemo Elemental Resonance makes traversing Mondstadt quite easy. This also allows for faster gathering of Local Specialties with Klee's passive.

This party helps speed up exploration in Liyue. Venti's Elemental Skill makes exploring Liyue's hills and cliffs and mountains quite easy. Bring Qiqi and Ningguang along to spot as many materials as possible and Diluc to mine all of the ore. Due to Liyue having so many ore deposits Diluc is recommended over Klee for optimal mining.

Elemental Resonance grants additional buffs based on the number of party members of a particular element. These buffs can help push a party's damage and synergy potentials to even greater heights and should also be greatly considered when creating a party.

Register as a member and get all the information you want. (It's free!)
Login
Opinions about an article or post go here.
Opinions about an article or post
We at Game8 thank you for your support.
In order for us to make the best articles possible, share your corrections, opinions, and thoughts about "Best Team Comp | Party Building Guide" with us!
When reporting a problem, please be as specific as possible in providing details such as what conditions the problem occurred under and what kind of effects it had.