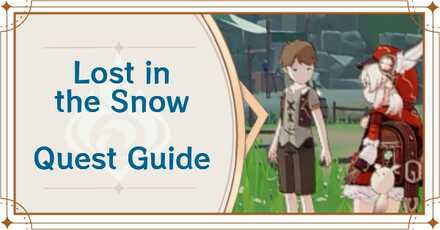 Lost in the Snow is a World Quest in Genshin Impact. Learn how to unlock this Quest and where it is found, as well as its rewards and a full walkthrough for completing the Quest.

Lost in the Snow Basic Information

Talk with Joel at the adventurer camp at the entrance of Dragonspine after the Version 1.2 update.

Lost in the Snow Walkthrough and Rewards

Lost in the Snow

Follow the Snow-Covered Path to search for Joel's father.

Lost in the Snow Objectives

Lost in the Snow Tips & Strategies

At the last campsite, you can find a bowl which you can put in 2 Berry for the foxes to eat. You can fill the bowl everyday and after a while, you should get a chest with a Crimson Agate.

Register as a member and get all the information you want. (It's free!)
Login
Opinions about an article or post go here.
Opinions about an article or post
We at Game8 thank you for your support.
In order for us to make the best articles possible, share your corrections, opinions, and thoughts about "Lost in the Snow World Quest Walkthrough and Rewards" with us!
When reporting a problem, please be as specific as possible in providing details such as what conditions the problem occurred under and what kind of effects it had.