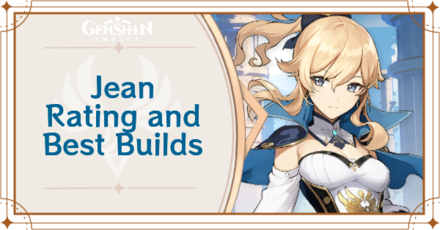 Jean is a 5-star Anemo Sword character in Genshin Impact. Learn about Jean's stats, strengths and weaknesses, best Artifacts build, and our rating of the character in this complete profile!

Buffs that increases ATK SPD are very rare in Genshin Impact. Jean's simple requirement of just absorbing any Elemental Particle or Orb will do wonders in increasing you Main DPS' DMG output!

How to Get Jean

Pull from Any Character Banner

You can get Jean at a normal rate on both the Wanderlust Invocation banner, and the current Character Event Wish. She is one of the five permanently available 5-star characters in the Standard Banner.

How to Get Jean's Sea Breeze Dandelion Skin

Jean's summer character skin became available in Version 1.6. The only way to get her outfit is by buying it from the shop with 1680 Genesis Crystals.

How to Get the Sea Breeze Dandelion Outfit

How to Use Jean

Use Gale Blade to Launch Enemies

The Elemental Skill, Gale Blade, allows Jean to pull enemies towards her and launch them to your chosen direction. Tap her Elemental Skill to automatically blow your enemies away. Hold it to pull and launch enemies off a platform, towards the water, the sky, or the wall!

Take note that enemies launched will take fall damage as they hit the ground.

Since Jean's healing ability scales with ATK, her elemental burst and ability to heal herself and the party gives Jean tank-like qualities in solo play, and especially in multiplayer.

Charged Attacks Can Lift Enemies Up

Aside from dealing heavy damage with her normal attacks, Jean's charged attack can lift enemies up as well. This gives you a chance to use her Elemental Skill to launch your enemies away!

For larger enemies like Mitachurls, you need to do her charged attack twice to completely topple them!

Best Artifacts and Weapons for Jean

See more comments (40 Comments)
Opinions about an article or post go here.
Opinions about an article or post
We at Game8 thank you for your support.
In order for us to make the best articles possible, share your corrections, opinions, and thoughts about "Jean Rating and Best Builds" with us!
When reporting a problem, please be as specific as possible in providing details such as what conditions the problem occurred under and what kind of effects it had.