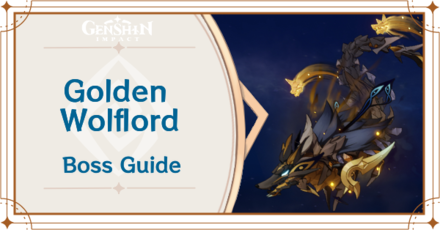 The Golden Wolflord is a Field Boss introduced in Version 2.3 of Genshin Impact. Learn about the Golden Wolflord Boss Info, location, how to unlock, recommended team comps, how to beat, attack patterns, item drops, and more in this guide!

The Golden Wolflord is the ruler of the Rifthounds found in Tsurumi Island. Just like the Rifthounds, it can also apply stacks of Corrosion when it hits your characters.

The Golden Wolflord is a Field Boss located in Tsurumi Island, which was introduced in Version 2.3!

Start the Through the Mists Questline 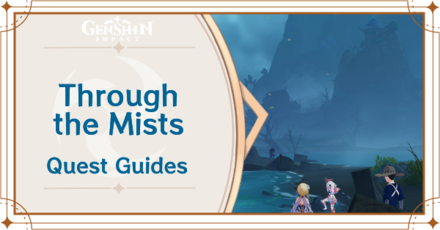 Once you've unlocked the waypoint near the Golden Wolflord, you can simply go back and forth fighitng it without needing to complete the Tsurumi Island Questline.

Use Geo Characters and Healers

During the fight, Geo characters and Healers are important. You need Geo to break the Rifthound Skulls faster, and you need healers to counter the corrosion stacks the boss will inflict on your characters!

Are you missing specific characters, or have you not built a full party yet? Teaming up with others from our Co-Op boards is a great way to quickly beat the Golden Wolflord and other bosses!

How to Beat the Golden Wolflord

Attack Rifthound Skulls to Bring it Down 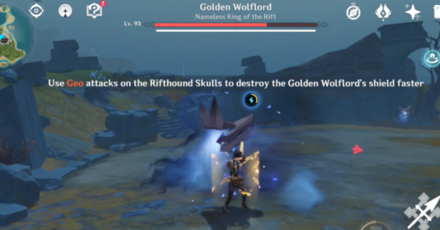 When the Golden Wolflord loses a certain amount of HP (70%-50%), they will summon three Rifthound Skulls and shield themselves. You need to destroy the separated Rifthound Skulls with Geo attacks which will bring the boss down. While the boss is down you can inflict damage until you defeat them! 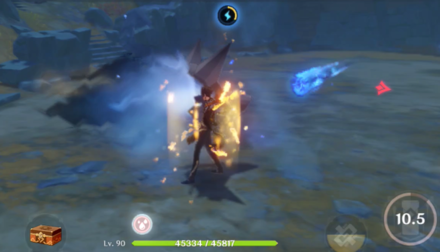 The separated Rifthound Skulls will attack with dark blue energy balls which will cause corrosion. The energy balls will also home on your characters so you need to outrun it and dodge it! 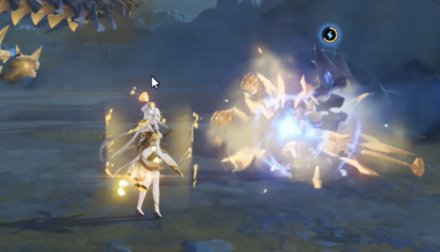 While you can destroy the Rifthound Skulls with other Elemental attacks, Geo is by far, more effective in destroying the skulls faster.

All Attack Patterns & How to Avoid Them

The Golden Wolflord charges up and fires a large beam. To avoid this, you can dodge at the right timing or go right beside the Golden Wolflord's head while they execute the beam to avoid getting hit! You can also attack while you're beside their head.

Ningguang's Skill Can Block It

Ningguang's Jade Screen can block this particular attack giving you a chance to dodge to a safe area.

The Golden Wolflord spins around and forms into a tornado and directly follows the characters as they run. Only a few characters can outrun it when it's in full swing.

As soon as you notice the Wolflord spinning around, run to the opposite direction then to the side to counter it!

The Golden Wolflord will land on the ground and swim around the field to charge at characters. To avoid this, you need to get as far as possible away from them. Once it's done, the boss will not move for a short period of time giving you a chance to deal damage!

The Rifthound Skulls in its golden state will home on the characters and explode upon contact. You need to outrun these until it's not homing on your character.

The Golden Wolflord will slam their tail on the ground and deal DMG to characters. You need to run away from them as soon as you notice they will do this attack pattern.

The Golden Wolflord will enter a shielded state and the Rifthound Skulls will be in a blue state. The skulls go to different sides of the arena to attack the players with dark blue energy balls that will home on your characters.

Destroy the Skulls to Bring Down the Boss

Destroying all three Rifthound Skills will bring down the Golden Wolflord allowing you to deal damage to them.

The Golden Wolflord will slam into the ground and emerge up, with certain areas on the arena lighting up and blasting any character standing above it. You need to be at the edge of the area when this happens to avoid getting damaged!

Characters that Use Golden Wolflord Materials

These characters will need a total of 46 Riftborn Regalia each to reach ascension level 6!

Other Boss enemies usually come with hidden achievements, but there is currently no known Golden Wolflord achievements. Have you gained any achievements from fighting this boss? If so, tell us how in the comments!

In order for us to make the best articles possible, share your corrections, opinions, and thoughts about 「Golden Wolflord Boss Guide | Genshin Impact」 with us!