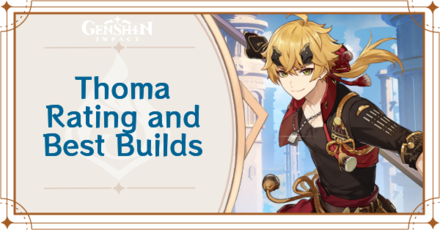 Sub-DPS and Support Builds for Thoma

This Thoma Sub-DPS build greatly increased his's damage thanks to the introduction of Dendro. This build is specifically tailored for Burgeon team comps, where Thoma is the main trigger for Burgeon reactions.

This Thoma Sub-DPS build focuses on dealing DMG when his Elemental Burst is activated. The Emblem of Severed Fate set will help in increasing Thoma's overall Burst DMG.

This Thoma Support build is all about the shields he generates to protect the entire party. Focus on getting HP and Energy Recharge stats for stronger shields and faster energy renegeration for his Elemental Burst.

Thoma's shields are his most important tools to bring out to the party. Prioritize his Elemental Skill first to strengthen your shields followed by your Elemental Burst to increase overall DMG.

All Recommended Weapons for Thoma

Yelan excels at the role of Sub-DPS but can have respectable DMG as a Main DPS with the proper teammates.

This Burgeon Team comp has Thoma acting as the Pyro Trigger for the Burgeon Reaction.

Thoma can be slotted in as a Pyro Sub-DPS for any Vaporize team comp. His goal will be to provide off-field Pyro damage for the Hydro Main-DPS to deal Vaporize damage.

Thoma can be an excellent addition any team comp that has a core Pyro Main-DPS and Hydro Sub-DPS. In this team comp, Thoma provides shields and a nice buff with his C6 unlocked.

Thoma is an excellent choice for this Triple Geo team comp for Itto. Thoma will work as teh Shielder and off-field Pyro damage that will put the Pyro Aura on enemies to trigger the Crystalize reaction.

Thoma's full support capabilities are unlocked in his sixth constellation as he will be able to increase your Normal and Charged Attack DMG whenever he summons a shield.

How to Use Thoma

Thoma's Elemental Skill, Blazing Blessing, deals AoE Pyro DMG to enemies while providing a shield. Thoma's shield is unique as its DMG Absorption can stack based on the remaining Absorption of the previous barrier.

In addition, Thoma will apply Pyro to himself, cleansing certain deterimental effects on him.

Scorching Ooyoroi functions similarly as Xingqiu's Rainswords as it can deal Pyro DMG even if Thoma isn't on the field. It can also provide Blazing Barriers when using Normal Attacks once every 1s.

A Blazing Barrier has a duration of 8 sec, and it refreshes every time your active character uses your normal attacks! The shield also stacks, which means that for every Scorching Ooyoroi proc, you refresh both duration and shield effectivity!

Can Catch Twice the Amount of Fish

After acquiring Thoma, he provides you a 20% chance to double the amount of fish caught in Inazuma, making it effective in collecting more fish than usual.

Thoma does not have to be in the party for his passive to take effect.

How to Get Thoma

Thoma is currently a rate-up in Tartaglia and Yae Miko's rerun banners in the second phase of Version 3.2. It runs from November 18, 2022 until December 6, 2022! Heizou, and the new 4-star Cryo character, Layla, are also on rate-ups in Phase 2.

You can also get Thoma on all Standard Wish Banners except Beginner's Wish!

Thoma's Thoughts About Others

See more comments (68 Comments)
Opinions about an article or post

In order for us to make the best articles possible, share your corrections, opinions, and thoughts about 「Thoma Rating and Best Builds | Genshin Impact」 with us!