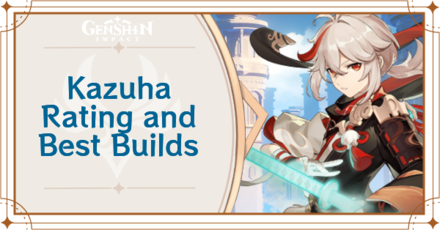 Sub-DPS and Support Builds for Kazuha

This Sub-DPS build for Kazuha deals high damage to single target and multiple enemies. A full EM stack can be swapped with your standard ATK%/Anemo/Crit Mainstat to give Kazuha more DMG at the cost of party DMG buffs. Kazuha will need around 170% Energy Recharge, which can be reduced depending on your team comp.

This support build for Kazuha focuses on having his Elemental Burst always ready and for buffing the party by stacking Elemental Mastery. Kazuha will still need around 170% Energy Recharge for this build, which is significantly easier to reach by using an Energy Recharge Mainstat or Weapon.

The Viridescent Venerer is undoubtably his best artifact set unless there is another Anemo user who uses the set in the party.

All Recommended Weapons for Kazuha

Best Characters and Strategies for Kazuha

C2 for an Overpowered Constellation

Kazuha's 2nd constellation can be defined as a meta-defining trait. It provides an absurd amount of Elemental Mastery to party members and Kazuha who will even further increase the Elemental DMG of party members thanks to his 2nd passive.

How to Use Kazuha

Since Kazuha will mainly be doing Anemo Swirl DMG, we recommend pairing him with an Elemental DPS. At Constellation 2, Kazuha increases the team's Elemental Mastery by +200 during his Elemental Burst.

Poetics of Fuubutsu gives the team an Elemental DMG bonus for 8s every time Kazuha triggers a Swirl reaction. This gives even more Elemental DMG to your team!

Use Chihayaburu to Jump High

Similar to Venti's Elemental Skill, Kazuha can launch himself in the air after holding Chihayaburu. This makes Kazuha a great character to have when exploring Teyvat!

Pull objects and enemies in!

Kazuha can pull enemies and objects towards his position when using Chihayaburu, which you can use for crowd control!

Drop down with a Plunging Attack! 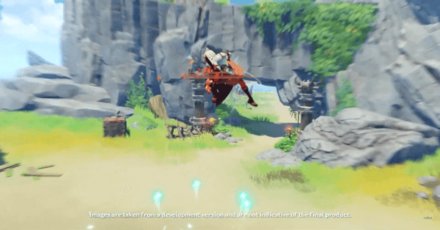 Since you'll be in the air, you can drop down with a Plunging Attack and deal additional DMG to your enemies. Your Plunging Attacks deal Anemo DMG by default, but deal different Elemental DMG when another Element is present.

Use Elemental Burst for AoE DMG 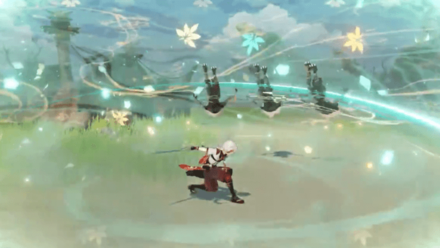 Kazuha's Elemental Burst, Kazuha Slash, expands into a wide AoE and deals continuous Swirl DMG to enemies inside. Positioning the Elemental Burst is easy too, because it expands out and away from Kazuha.

Whatever Element reacts with Kazuha's Burst first will set the Anemo Swirl DMG within the AoE. Kazuha's Elemental Burst color changes with the Element Swirl too, making a pretty sight for Kazuha-users! 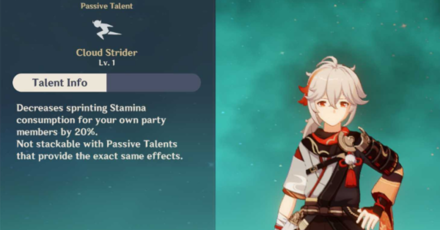 Kazuha's Exploration Talent, Cloud Strider, reduces stamina consumption while sprinting. This allows you to cover more ground at a much faster rate, or give you more stamina to use for other activities. 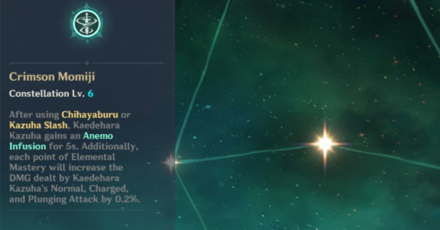 When Kazuha's Constellation 6 is aquired, using Chihayaburu and Kazuha Slash will infuse Kazuha with Anemo for 5s. Each point of Elemental Mastery will increase DMG from Normal, Charged, Plunging Attack by 0.2%. This means that Kazuha would be able to deal further damage!

Sucrose Does Not Buff Kazuha

However, according to the June 30, 2021 Developer's Discussion, this buff does not apply to Kazuha, as the only exception. It was explained that this is to avoid infinite stacking of stat bonuses.

How to Get Kazuha

See more comments (123 Comments)
Opinions about an article or post

In order for us to make the best articles possible, share your corrections, opinions, and thoughts about 「Kazuha Rating and Best Builds | Genshin Impact」 with us!