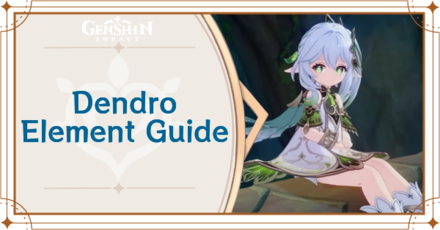 Dendro is the Plant Element in Genshin Impact. In this guide we'll talk about the new Dendro Reactions like Aggravate and Spread, how to use the Dendro Element, and an explanation of the Dendro Reosnance! 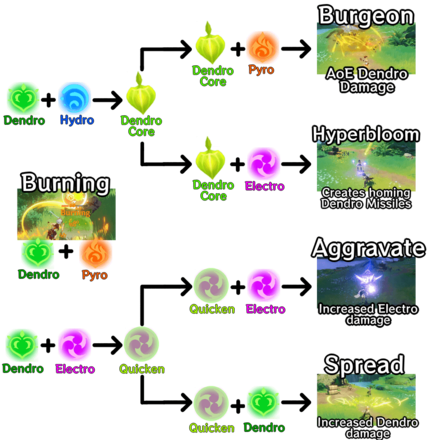 Bloom is a combination of Hydro and Dendro. When these two elements react, it will spawn a Dendro Core. Only a set amount of Dendro Cores can be on the field at any time.

The character who creates the Dendro Core will affect the damage of the Dendro Core explosion. Dendro Cores will explode when more are created past the limit or if their spawn duration ends, dealing Dendro damage. This damage can be increased by Elemental Mastery.

Burgeon is the reaction when a Dendro Core comes into contact with the Pyro Element. This will cause the Dendro Core to explode, dealing wide AoE Dendro damage.

The character who is the source of the Pyro damage will affect the damage from the Burgeon reaction. This damage can be increased by the character's Elemental Mastery or certain effects that increase Burgeon damage.

Dendro Cores that come into contact with Electro will trigger the Hyperbloom reaction, which creates Sprawling Shots. These are homing projectiles that deals Dendro damage.

The character who is the source of the Electro damage will affect the damage from the Hyperbloom reaction. This damage can be increased by the character's Elemental Mastery or certain effects that increase Hyperbloom damage.

Catalyze is the reaction when Dendro and Electro comes into contact with each other to create the Quicken Aura. The Quicken Aura is signified by the green lightning around the enemy.

Both Dendro and Electro will need to be applied on the enemy to refresh the duration of the Quicken Aura.

This Electro damage can be further increased by the Elemental Mastery of the character and by certain effects that increase Aggravate damage.

This Dendro damage can be further increased by the Elemental Mastery of the character and by certain effects that increase Spread damage.

Burning is the reaction when an enemy with a Dendro or a Pyro Aura comes into contact with Pyro or Dendro damage respectively. It will deal Pyro damage over time.

The Pyro damage from burning will be affected by the character who triggers the burning reaction. This damage can be increased by Elemental Mastery and by certain effects that increase Burning damage.

Burning can be refreshed infinitely by Dendro damage. 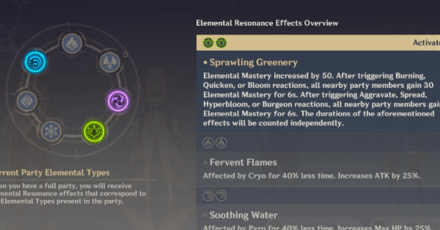 What is the Dendro Element?

Dendro is the Plant Element in Genshin Impact, with Sumeru being the designated Dendro Region and Lesser Lord Kusanali as the Dendro Archon

The Dendro Aura has no negative effects when applied to characters. However, this enables Dendro Elemental reactions to trigger like Burning if it comes into contact with other Elements.

In order for us to make the best articles possible, share your corrections, opinions, and thoughts about 「Dendro Element and Reactions Guide | Genshin Impact」 with us!