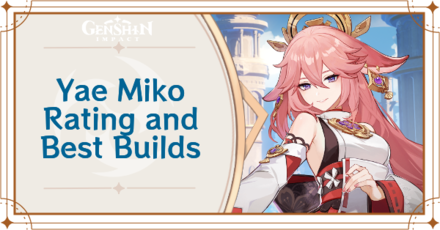 This Yae Miko Sub-DPS build is her general go-to set that works for any team comp. Yae Miko needs around +170% ER to use her Burst off cooldown, but this can be reduced by other characters like Fischl or in double Electro teams.

This Dendro team build for Yae Miko focuses on enhancing her damage from the Aggravate Elemental Reaction. This build should only be used if Yae Miko is in a Dendro team and will deal Aggravate damage.

This Yae Miko build sacrifices her personal DMG for a party-wide 20% ATK buff. Due to the nature of her Elemental Skill, the ATK buff will almost always remain active if she's played properly.

All Recommended Weapons for Yae Miko

Yae Miko works best when paired with another Electro character for Electro Resonance. For this matter, Raiden fits best as Yae Miko's Main DPS as she can also recover Yae Miko's huge energy cost for her Elemental Burst.

Bennett and Kazuha also provide the best buffs for both Raiden and Yae Miko with minimal investment. It also enables the Overloaded reaction!

Electro-Charged is also a viable team comp option for Yae Miko as she can virtually apply high off-field Electro after every rotations!

While Raiden and Tartaglia should provide the most damage and fast reactions to proc Electro-Charged, their positions can be replaced with other Hydro or Electro characters like Xingqiu or Fischl instead.

This Dendro Team comp has Nahida apply the Dendro Aura on the enemy while Yae Miko applies Quicken and triggers the Aggravate reaction. Fischl is here to help by providing Energy Particles for Yae Miko while Kazuha provides Elemental DMG buffs.

C1 for an Overall Character Improvement

Yae Miko's huge Elemental Burst cost is heavily alleviated by unlocking her 1st Constellation. This improvement makes her more viable for team comps that don't have another Electro character.

How to Use Yae Miko 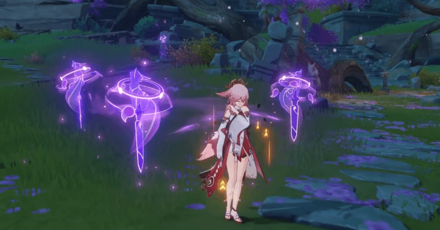 To maximize the Sesshou Sakura damage, all of them need to close and connect together. The most efficient to do this is by creating a small triangle. Note that you can create a turret right beside the other one, as long as you don't create another one in the same place! 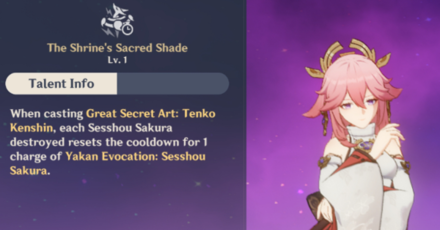 After unlocking The Shrine's Sacred Shade passive talent, destroying a turret will reset the cooldown for one of the turrets as well. A turret is destroyed once you deploy a new turret on the field or when the duration runs out.

Can be used to Dash Away from Enemies

When you use a Sesshou Sakura Yae Miko will teleport a short distance forward, if you're running and backwards if you're idle. Skillful use of this would put some distance from enemy attacks and create another turret to strike enemies!

However, you need to carefully place it away from potentially harmful items (like exploding barrels, torches, or water) to avoid hurting Yae Miko or your party.

Yae Miko's Elemental Skill have different animations; when used while running or walking, she will dash forward and when she's idle or just standing for a short period of time, she will dash backward!

When Yae Miko uses her Elemental Burst, she will use up all nearby Sesshou Sakura to deal devastating AoE Electro DMG. After the initial hit, succeeding bolts of lightning will strike the area based on the number of Sesshou Sakura available prior to usage!

To increase Yae Miko's Elemental Burst, you need to deploy her fox turrets so that it pulses more with Electro DMG!

Yae Miko's Normal Attacks can combo up to three times and her Charged Attacks can deal AoE Electro DMG in a straight line, which can be quite useful against mob enemies.

While Yae Miko has a powerful Charged Attack, the animation has quite a long wind up which takes up time. You can cancel this long animation by jumping as soon as you see the Electro Fox wind Yae Miko's right shoulder!

Meditations of a Yako

How to Get Yae Miko

See more comments (140 Comments)
Opinions about an article or post

In order for us to make the best articles possible, share your corrections, opinions, and thoughts about 「Yae Miko Best Builds and Artifacts | Genshin Impact」 with us!