Should You Pull the Epitome Invocation Wish? | Genshin Impact 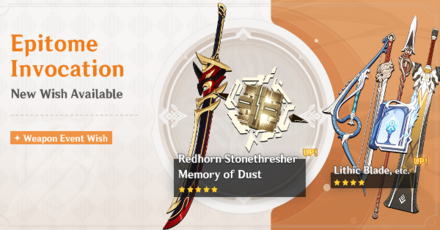 The Epitome Invocation is the Weapon Wish Banner in Genshin Impact. Read this guide to learn all the featured weapons from the past and present weapon banner, the current weapon banner countdown, how to use our Weapon Gacha Simulator, if you should pull on the banner, and more!

End Dates for All Servers

Details on upcoming weapons in Version 2.8 will most likely be revealed during the next livestream. We'll update this section when new information is revealed.

Should You Pull the Epitome Invocation Wish?

The Epitome Invocation Banner has a slightly higher 5-star drop rate than normal. You only need to pull 80 times to get a guaranteed 5-star instead of the usual 90 pulls for character gachas. However, you can't get 5-star characters from this banner!

This banner also utilizes the Epitomized Path, which allows you to get the 5-star Weapon of your choice! This only applies if you fail to obtain it after getting two other 5-star Weapons.

Pull for ATK and CRIT Weapons

The Redhorn Stonethresher and Memory of Dust are great weapons for increasing the overall damage of your characters. It works best on certain characters like Itto, Noelle, Ningguang, and Yanfei, but they are also good for most DPS Claymore or Catalyst characters.

Post (2 Comments)
Opinions about an article or post go here.
Opinions about an article or post
We at Game8 thank you for your support.
In order for us to make the best articles possible, share your corrections, opinions, and thoughts about "Should You Pull the Epitome Invocation Wish?" with us!
When reporting a problem, please be as specific as possible in providing details such as what conditions the problem occurred under and what kind of effects it had.