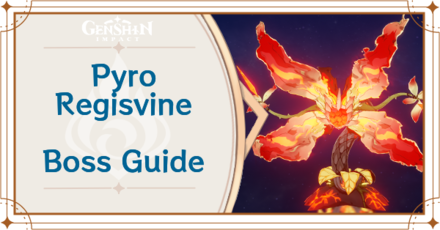 How to Beat Pyro Regisvine

The Cryo Regisvine's weakness is its two cores. Attacking these will break the core and stun the Regisvine. 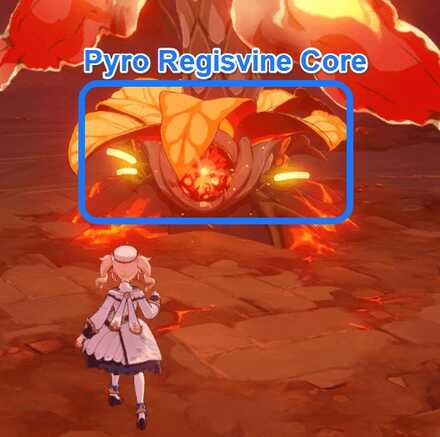 The first core of the Pyro Regisvine appears on its roots. This can be easily attacked and broken using melee attacks. However, you have to remain alert, as the Regisvine has a series of strong close-range attacks that can knock you back. 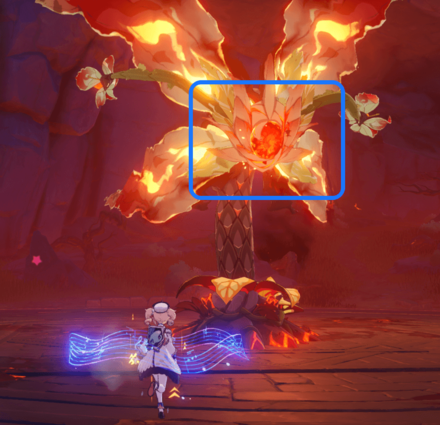 After breaking the core on the roots, the next core will form on its Corolla. This is harder to hit, requiring a Bow or Catalyst user to deal damage while its up. The best time to attack this core is when the corolla drops down for an attack.

Avoiding the Pyro Regisvine's attacks mean you need to run and dodge a lot. Make you you conserve your stamina for the quicker attacks, as you might get damaged a lot if you're not careful.

Use Bows or Catalysts 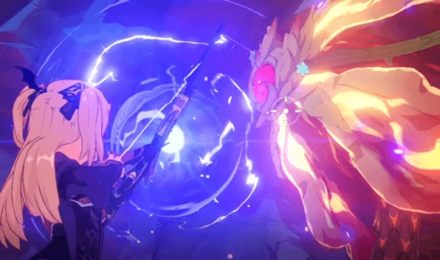 When the Pyro Regisvine changes its weak point, it can be difficult for your melee characters to attack its head and catalyst users might automatically attack its base. We recommend using bow or catalyst users to aim for the Corolla!

Barbara's Hydro attacks are one of the best ways to break the Pyro Regisvine's core. She can easily attack the core on the roots, and can attack the Corolla core once it drops down. Being a Catalyst user, she can attack from a safe distance, preventing you from taking damage.

This lineup allows you to perform strong Elemental Reactions against the Pyro Regisvine. You can use Kaeya to generate Melt Reactions, and Barbara to deal Vaporize. Lisa can also generate Overloaded, which works best when the Regisvine is stunned.

Here's a quick overview on the best characters to use when fighting the Pyro Regisvine.

Hydro Resonance is essential against the Pyro Regisvine. Increased Pyro RES (40%) prevents you from taking too much damage, while increased healing enables you to regain health at a much faster rate.

A good combo with Hydro Resonance, Geo Resonance provides you with shields that protect you from damage, while also increasing your ATK. Geo can also generate Crystallize Reactions, giving you more shields to protect you during the fight.

The Pyro Regisvine can launch multiple homing fireballs that will burn and stun you when hit. Avoid this by running and dodging before it hits you, or use shields.

This attack creates a field of Pyro AoE attacks that deal massive damage in random parts of the field. You can avoid this by constantly running around in a circle until the attack ends.

Similar to the Cryo Regisvine attack, this Plunging Burst deals Pyro damage in a wide area. This can be done 3 consecutive times, which might catch you off-guard if you're not ready. Dodge the attack as soon as its head goes down.

You can also use this opportunity to attack the Corolla core after it attacks.

Avoid this attack by continuously dashing left or right until the barrage of fireball ends.

A powerful fireball attack that spawns a flower that will explode after a few seconds. The explosion will also set the ground on fire which can deal damage if stepped on. You can attack the flower before it explodes to avoid taking damage.

Characters That Use Pyro Regisvine Materials 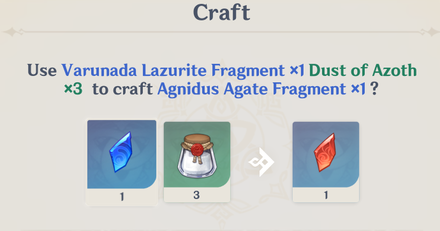 If you're looking to build Hydro to make the battle easier, you can convert the Agnidus Agate you can get into Varunada Lazurite, which is used for Hydro Character Ascension.

How to Convert Character Materials

"That Was Blooming Hot" Achievement

In order for us to make the best articles possible, share your corrections, opinions, and thoughts about 「Pyro Regisvine Weakness and Strategy Guide | Genshin Impact」 with us!