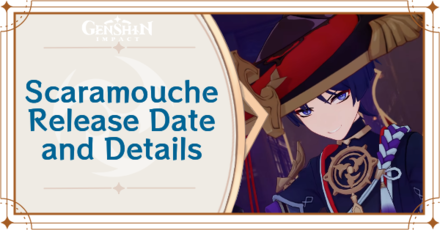 Scaramouche, also known as Kunikuzushi, is the 6th Fatui Harbinger, "the Balladeer", in Genshin Impact. Learn more about Scaramouche's confirmed character info, voice actor, story appearances, voicelines about Kunikuzushi, and our predictions for his possible release! 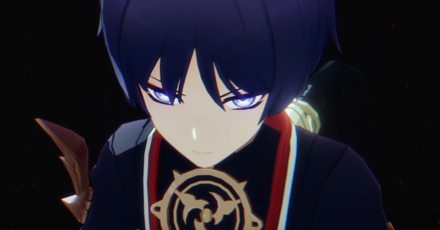 In the 3.1 Livestream, Scaramouche was shown in the teaser and will likely play a role in the latest Archon Quests! Chapter 3: Act 3 and Act 4 will release in Version 3.1, on September 28, 2022.

There is still no confirmation as to what Scaramouche's Element and Vision is until now, even with the release of the Archon Quest in the Version 2.1 Update.

His outfit suggests that he might be an Electro user, but it also might just represent his Inazuman origins.

Similiar to his Vision, we have yet to see Scaramouche use any weapon. We will update once we have more information.

There aren't a lot of information available about Scaramouche, and some details are still a mystery such as his rarity, and his weapon. What weapon do you think he will wield? When do you think we'll see more of him? Feel free to discuss in the comments section below!

Sixth of the Fatui Harbingers

Scaramouche, or otherwise known as either Kunikuzushi or the Balladeer, is the 6th member of the Fatui Harbingers, a group of elite soldiers and officers based in Snezhnaya serving under the Cryo Archon, the Tsaritsa.

All Members of the Harbingers

Before creating the Raiden Shogun puppet, Ei first created a prototype puppet, resulting in Kunikuzushi. Not wanting to kill him, Ei sealed his powers instead and let him roam Inazuma freely even when he woke up from slumber.

Some time after, the Fatui discovered Kunikuzushi and unlocked the seal that was placed on him and added him to the ranks of the Fatui as the 5th Fatui Harbinger.

Related to the Husk of Opulent Dreams Artifact Set

The Husk of Opulent Dreams Artifact Set detailed parts of Scaramouche's past, from his creation by Ei to his travels in Inazuma, his choosing of his own name, as well as his eventual return as a Fatui Harbinger.

According to the artifacts' description, Scaramouche was meant to be a vessel for a 'heart' but was deemed too fragile due to crying in his sleep. He woke up for unknown reasons, observed humans and desired a heart, as was his original purpose.

Hues of the Violet Garden 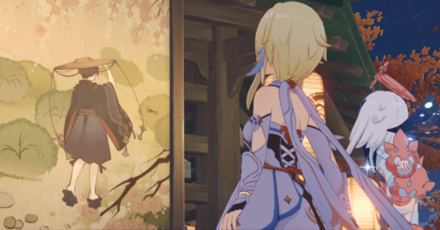 Scaramouche doesn't appear during this event, but he was shown during flashbacks and was painted as Albedo's fifth model for Kunikuzushi.

According to Ayato, Scaramouche snuck into the Police Warehouse in Inazuma City to search for something related to the Kaedehara clan. Unfortunately for Scaramouche, he couldn't find what he was looking for, forcing him to leave Inazuma.

Relation to Kazuha's Past

During the event, it was revealed that Kunikuzushi was one of the reasons for the decline in wealth and status of Kazuha's family in the past, as well as the loss of three other prominent clans of Inazuma. Kunikuzushi crippled the head of the Kamisato Clan at the time, and nearly destroyed the Kaedehara Clan.

This is further alluded to in the Calabash of Awakening Piece of the Husk of Opulent Dreams Artifact Set, where it is mentioned that Kunikuzushi destroyed the clans as an act of revenge. It was not made clear what, or who, he was doing it for. 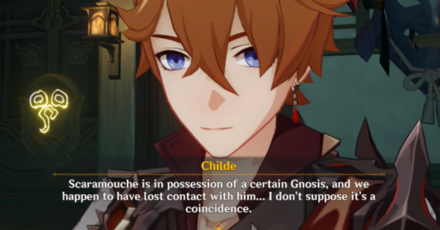 Scaramouche doesn't appear during the event, but fellow Fatui Harbinger Tartaglia does show up mysteriously in Inazuma.

Tartaglia explained why he was in Inazuma to the Traveler during the third event quest in Labyrinth Warriors. According to him, Scaramouche had successfully taken the Electro Archon's Gnosis, but did not report back to the Harbingers and mysteriously disappeared with it. 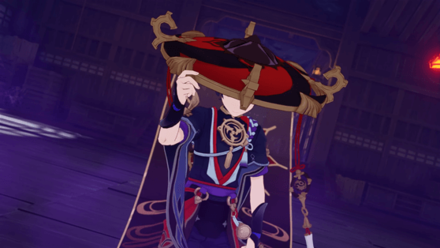 Scaramouche appears again in Inazuma during the third act of the Archon Quest. He oversees the Delusion factory in Inazuma where he confronts the Traveler, his plan is foiled when Yae Miko steps in to help you. His plan ultimately succeeds with this however, as in order to spare the Traveler's life, Yae Miko gives Scaramouche Ei's Gnosis. 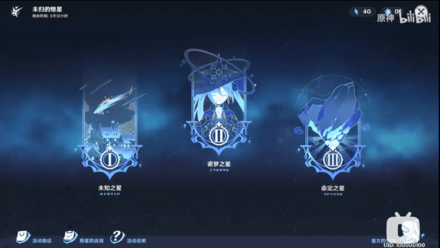 Scaramouche first appeared in the Star of Deceitful Dreams part of the Unreconciled Stars event, during the The Crisis Deepens quest.

He was located on the road near Wangshu Inn, near one of the Dawn Winery staff you need to find. If you commented that his clothes are beautiful, he will say that he is from Inazuma.

He appeared friendly at first, but it was revealed that it was just a ruse to lower the Traveler's guard so he can kill them. This was ultimately stopped by Mona who sensed his intent and teleported the group to safety.

All Available Lines on Scaramouche as Kunikuzushi

In order for us to make the best articles possible, share your corrections, opinions, and thoughts about 「Scaramouche (Kunikuzushi) Release Date and Voice Actor | Genshin Impact」 with us!