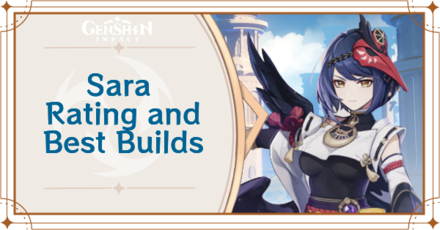 This Sara Build allows you to buff your party's ATK through her Elemental Skill and Elemental Burst.

If your party already has a 4 piece Noblesse Oblige user, then you can use the 4 piece Emblem of Severed Fate as an alternative.

Sara's main buffing tool is her Elemental Skill, so prioritize in upgrading the talent to get a stronger ATK buff. Afterwards, level up her Elemental Burst to deal a considerable amount of Electro DMG.

All Recommended Weapons for Sara

Kujou Sara can fit in any team comp that requires a Support Character that will provide a DMG increase buff. It would be preferable if she was slotted in a team line-up that can benefit from the Electro DMG she also provides.

The requirement of needing to do a full-charged shot after using Kujou Sara's Elemental Skill is a hassle to deal with. Reaching C2 makes providing ATK buffs easier and helps in keeping the ATK buff permanently on.

Kujou Sara's 6th Constellation will make her shine as an Electro DMG Buffer whenever she buffs a party member. This will be extremely beneficial for Electro DPS characters such as Raiden or Keqing.

How to Use Kujou Sara

Use Elemental Skill to Buff Allies with Charged Attacks

Sara's Elemental Skill, Tengu Stormcall, allows her to retreat a short distance. Once she's far away, she can use her Charged Attack to shoot a Crowfeather, which triggers an AoE Electro DMG after a delay.

Any active character that stands within the Crowfeather's field of explosion grants an ATK Bonus based on Sara's Base ATK. This cannot be stacked.

Scales on Sara's Base ATK

Like Bennett's Elemental Burst, Sara's buff scales on her Base ATK, and will not be increased by artifacts. Instead, you can either level Sara up or give her a stronger weapon with high Base ATK to increase its effects!

Both these attacks also give the same ATK Bonus for the active character. These do not stack.

How to Get Kujou Sara

Kujou Sara is available at a normal rate on all Standard Wish Banners except Beginner's Wish. This means you can get her from Wanderlust Invocation, Epitome Invocation, and the current Character Event Wishes.

Kujou Sara's Thoughts About Others

In order for us to make the best articles possible, share your corrections, opinions, and thoughts about 「Kujou Sara Rating and Best Builds | Genshin Impact」 with us!