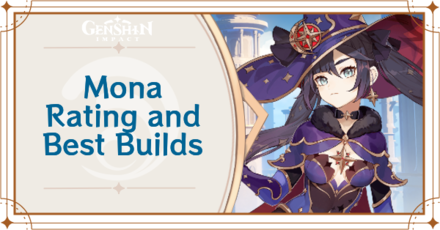 Sub-DPS and Support Builds for Mona

This Sub-DPS build for Mona will provide her with the highest Elemental Burst DMG without Elemental Reactions. We recommend meeting your Energy Recharge needs (+150%) through the substats.

This Sub-DPS build for Mona increases her overall Hydro DMG. It is best used when Mona only requires her base Energy Recharge to use her Burst off-cooldown. Between our two Sub-DPS builds, choose the one you have better substats for!

This Support build for Mona sacrifices her DMG for more team-wide utility. Having her Elemental Burst always ready is a priority in this build, so try to find the sweet spot depending on your team comp!

Mona's Elemental Burst is the key trait in what makes her a top tier character in Genshin Impact, so leveling it up first is a priority. Her Elemental Skill and Normal Attacks can be left for 2nd and 3rd respectively.

All Recommended Weapons for Mona

Mona's 1st Constellation is a huge buff to her as a support for Elemental Reaction-based teams. What makes it so good is that the buff applies as long as you're hitting an Omen-affected enemy, meaning if you hit an enemy just before her Omen buff expires, you will still get a full 8s Elemental Reaction buff!

How to Use Mona

Her Elemental Skill, Mirror Reflection of Doom, will leave behind a decoy that taunts nearby enemies, and using the hold version makes Mona backstep upon cast.

Combining Mona's unique dash and her Elemental Skill allows for some quick emergency escape for safety.

Mona's ability places a debuff bubble on enemies that not only amplifies the damage dealt to them but also deals an explosion of Hydro damage when the bubble is popped. Using the Hydro explosion to trigger Melt or Vaporize will deal massive amounts of damage.

Able to Dash Across Water

Unlike most characters, Mona is able to continue dashing across the surface of the water, making it significantly easier to traverse. Although it doesn't last much longer than a standard Dash, it proves long enough to cross most rivers smoothly.

Mona cannot dash while already on water, so be sure to start dashing when you are still on land. Also, watch your stamina bar while dashing – Mona will drown just like other characters if she runs out of stamina in the water. 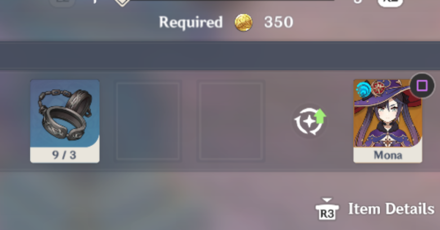 Mona's Passive Talent “Principium of Astrology” has the potential to refund 25% of the materials used when crafting Ascension Materials. This will allow you to save time on hunting for rare crafting materials, so be sure to always choose Mona when crafting these items.

How to Get Mona

Pull from All Character Banners

Mona is a permanently available 5-star character you can get in both the limited banners as well as the standard banner.

Mona's Thoughts About Others

In order for us to make the best articles possible, share your corrections, opinions, and thoughts about 「Mona Rating and Best Builds | Genshin Impact」 with us!