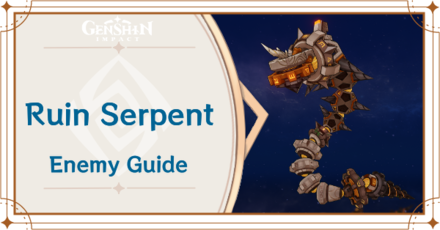 The Ruin Serpent is a Field Boss located in The Chasm, found to the west of Liyue. It was introduced in Version 2.6 of Genshin Impact.

The Chasm Map Guide and How to Unlock

How to Unlock the Ruin Serpent

Unlock via The Chasm Delvers Quest 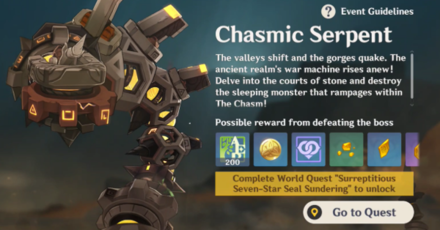 To unlock the Ruin Serpent, you need to complete the Surreptitious Seven-Star Seal Sundering World Quest, which is the second quest under The Chasm Delvers Quest Chain. This quest unlocks the first portion of The Chasm: Underground Mines map!

Talk to Jinwu for the First Time 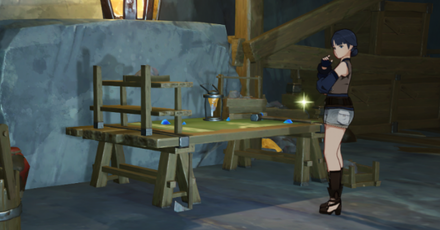 The Ruin Serpent Field Boss can be immediately accessed after talking to Jinwu for the first time, once you've unlocked the Underground Mines!

How to Get to the Ruin Serpent

In the full map, there's a Teleport Waypoint directly in front of the Ruin Serpent. However, it can only be unlocked after going through the tunnel on the way there! The tunnel is tricky to find even though it's near the first camp with Jinwu because it's located above it.

How to Get to the Ruin Serpent Guide

Recommended Characters for the Ruin Serpent

A key mechanic in this fight is destroying the Geo Crystals that periodically spawn on the map. The best way to destroy these things are by using Geo attacks or Claymore normal attacks!

Are you missing specific characters, or have you not built a full party yet? Teaming up with others from our Co-Op boards is a great way to quickly beat the Ruin Serpent and other bosses.

How to Beat the Ruin Serpent

The Ruin Serpent will burrow and create fields of Dark Mud and Oozing Concretions around the arena.

Use your Lumenstone Adjuvant to clear the Oozing Concretions from the main bulb. Doing this will immediately dispel the Dark Mud around it and will paralyze the Ruin Serpent for a short period.

Watch Out for the Siphoning Attack

From the Liyue Diaries Vol. 3, the Ruin Serpent will sometimes spin around and siphon energy. Prevent this from presumably absorbing the Oozing Concentration around it with your Lumenstone Adjuvant!

How to Clear Oozing Concretions

Get Lumen Energy from Geo Crystals

When the Ruin Serpent generates crystals in the arena, you can use Geo characters to destroy it and create Lumen energy! You need the Lumen energy to use your Lumenstone Adjuvant and destroy the Oozing Concretion.

It's yet to be known if it's used for another important mechanic, but we'll update this section once the info has been released!

When the Ruin Serpent readies itself and smashes down the ground. Afterward, it'll do a sweeping attack that glides left and right. It seems to be a pretty hard to dodge mechanic, so either take your distance or bring a character that can shield you!

Characters that Can Shield You

You can also use Geo to create Crystallized shields! In which case, Gorou is good for this reaction, as he can attract crystals when his Elemental Burst is up.

Characters that Use Runic Fang

These characters will need a total of 46 Runic Fangs each to reach ascension level 6!

In order for us to make the best articles possible, share your corrections, opinions, and thoughts about 「Ruin Serpent Where to Find and How to Unlock Boss Guide | Genshin Impact」 with us!