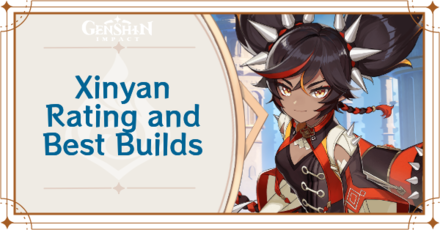 This Xinyan build finds use in both her Normal Attacks and her Elemental Burst to deal the most damage possible while being on the field.

This Xinyan build focuses on dealing high Physical DMG through using her Elemental Burst. This build is very effective when you have her 2nd Constellation unlocked.

This Xinyan build utilizes her Elemental Skill to provide a strong shield and to trigger the Tenacity of the Millelith artifact set buffs. This is only effective when you manage to hit more than one enemy with her Elemental Skill.

If she were to be a Main DPS, upgrade her Normal Attack talents for the most on-field DMG followed by her Elemental Burst.

For Sub-DPS, level up her Elemental Burst first to deal the most Physical DMG in a quickswap team.

And if she were to be a Support character, level up her Elemental Skill first to have increased Shield durability.

All Recommended Weapons for Xinyan

Having Xinyan's C2 makes her initial Burst cast to CRIT every time it's casted. If you want her to support the party, C2 also immediately creates her Level 3 shield. C4 also reduces Physical RES, which is great for herself and Physical team comps!

How to Use Xinyan

Xinyan's Elemental Skill attacks nearby enemies with Pyro DMG, and forms a shield. The amount of DMG absorption that the shield can handle is based on her DEF stat, along with the number of enemies hit by the attack.

Hitting 3 enemies with the attack will conjure flames on her shield, dealing AoE Pyro DMG to nearby enemies for a certain period of time.

Xinyan's Elemental Burst is a brief Pyro damage over time blast, with an initial Physical DMG burst that launches enemies. This Pyro Blast will last for a brief amount of time, and is also great for taking down Cryo shields.

With C2, this initial Physical Damage will always crit and form the best shield level. 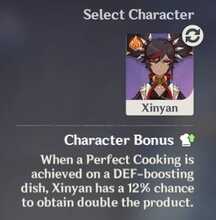 Similar to Noelle, Xinyan's Passive Talent allows her to cook more DEF boosting food. this allows you to create more dishes while saving more ingredients in the process.

The Show Goes On, Even Without An Audience...

How to Get Xinyan

Xinyan is available at a normal rate on all Standard Wish Banners except Beginner's Wish. This means you can get her from Wanderlust Invocation, Epitome Invocation, and the current Character Event Wishes.

In order for us to make the best articles possible, share your corrections, opinions, and thoughts about 「Xinyan Rating and Best Builds | Genshin Impact」 with us!