How to Use the Weapon Refinery

Unlock by clearing The Rite of Blades

Weapon Skills can be upgraded or evolved! 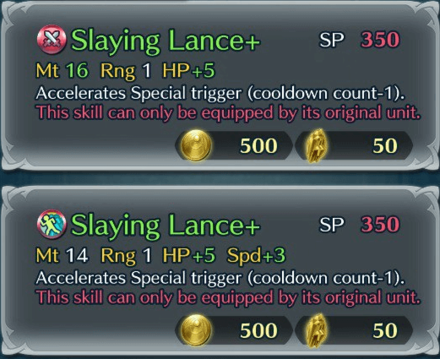 In the Weapon Refinery, you can use SP to upgrade the Weapon skills your Heroes possess, giving them new effects. In addition to the effects that they already have, their stats can be raised and they can given new special abilities. Finally, some weapons can be evolved to the final level of their respective skill chain.

An example of Weapon Evolution, Tyrfing evolving to Divine Tyrfing

You will need materials!

an Arena Medal and a Refining Stone respectively.

Unique Weapons become very powerful, but are difficult to refine

Exclusive Weapon Skills can gain new special abilities in addition to increased stats. At the same time, they are much more difficult to refine, and they require the use of a material called Divine Dew. Divine Dew is obtained each time you use Refining Stones in the Weapon Refinery.

In the case of Hana's Katana, it gains an effect similar to Swift Sparrow.

Things to Note About the Weapon Refinery 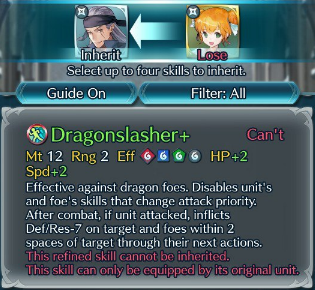 Skills upgraded in the Weapon Refinery cannot be inherited, but you can use a Hero who possessed an upgraded weapon as a source Hero for Merge Allies to pass on the skill to the same Hero.

All Unique Weapons That Can Be Refined

Unique Weapons That Can Be Evolved

It is possible to evolve the Unique Weapons above to make them extremely powerful. Note that Seliph, Eliwood, Merric, and other Heroes who appear as 4★ units are listed.

Unique Weapons That Can Be Upgraded

In addition to raising a weapon's stats, you can give it special abilities

The Heroes listen above possess Unique Weapons that can be upgraded in the Weapon Refinery. In addition to increasing the weapons' stats, upgrading them can increase the effects that they have or add new additional effects.

All Non-Unique Weapons That Can Be Refined

Non-Unique Weapons That You Can Evolve

The final weapon in a skill chain can be evolved

Note: For Inherited weapons, the SP will increase to 450.

Weapons That You Can Upgrade

Upgrading regular (Non-Unique) weapons in the Weapon Refinery will add an effect that gives a stat bonus or increase the current effefcts. The dragonstones wielded by manaketes will all gain the following effect when upgraded: If foe’s Range  = 2, calculates damage using the lower of foe’s Def or Res.

You can add effects that only work on cavalry/armored units

Required Materials for the Weapon Skill Evolutions Seen Above (All)

Note: For Inherited weapons, the SP will increase to 525.

Other Notes About the Weapon Refinery

A light emits from upgraded weapons when they are held

When Heroes possess a weapon that has been upgraded in the Weapon Refinery, they will emit a glowing light. The color of the light differs based on which type of upgrade the weapon has.

Through the introduction of the Weapon Refinery, many Heroes gained new options regarding their growth. However, the materials needed in the Weapon Refinery are highly valuable, and the amount of obtainable Refining Stones and Divine Dew is quite scarce. This means that rather than upgrading weapons on a whim, you should only use the Weapon Refinery after putting serious consideration into your decision.

Post (0 Comments)
Opinions about an article or post go here.
Opinions about an article or post
We at Game8 thank you for your support.
In order for us to make the best articles possible, share your corrections, opinions, and thoughts about "Weapon Refinery and Associated Weapon Skills" with us!
When reporting a problem, please be as specific as possible in providing details such as what conditions the problem occurred under and what kind of effects it had.