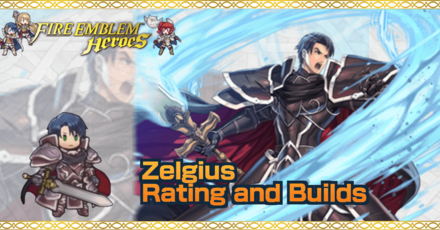 This is a ranking page for the hero Zelgius - Jet-Black General from the game Fire Emblem Heroes (FEH). Read on to learn the best IVs (Individual Values), best builds (Inherit Skill), weapon refinement, stats at Lv 40, and more for Zelgius.

The best IVs for Zelgius are +Atk and -HP. Zelgius shines best in being an enemy phase counterattacker. A +Atk IV synergizes with his kit to effectively fill this niche. His HP stat is of less importance, so it is safe to take it as a bane.

If you prefer a tankier Zelgius that can frequently execute follow-up attacks, you can take a +Spd IV instead.

We recommend a +Spd IV when merging Zelgius to 10. At +10 Merges, Zelgius' Atk will reach such high levels that pushing it up higher is a waste, considering he has access to Black Luna, one of the most powerful specials in the game. At this point, it would be better to opt with a +Spd IV instead to help him take less follow-up attacks and allow him to make some follow-up attacks on his own. Follow-up attacks also speed up special activation.

This is a dual-phase build that makes use of Zelgius' native Black Luna and Alondite. Bold Fighter 3 takes care of the player phase, and Steady Breath takes care of the enemy phase. If you can afford Threat. Atk/Def 3, you can go for that too. The Sacred Seal slot is flexible, but Quickened Pulse allows you to take out a priority target at the start of battle as only a handful of units can survive a well-invested Black Luna

This build is designed for consistent Black Luna activations. This is why Special Spiral 3 and Slaying Blade+ are picked up.

This is a high budget build that will guarantee instant activation of Black Luna due to the stacking effects of Alondite's refine, Special Fighter 3, and Swift Stance 3. You can also opt for Swift Stance 2 as his Sacred Seal to further fix his low Res.

We recommend the Special Effect Refine for Alondite

We recommend getting this refine as he will be able to activate Black Luna even faster when paired with other Special acceleration skills like Special Fighter 3.

Zelgius is a close physical attacker (range = 1). Therefore, when not accounting for the Weapon Triangle, the amount of damage he deals will be equivalent to his Atk minus the foe's Def stat.

Counterattacks Regardless of Range

Alondite allows Zelgius to counterattack regardless of range. This synergizes with his kit making him a very deadly unit in the enemy phase. This somehow patches his low mobility as units cannot kite him around obstacles without getting damaged.

Black Luna treats foe's Def/Res as if reduced by 80% and only has cooldown counter of 3. It can be considered as one of the most powerful specials in the game because of its sheer power and low cooldown. It is also exclusive to Zelgius, making it an ideal skill to build him around.

Zelgius takes 1.5x damage from armor-effective weapons like Armorslayer+, and one blow from this type of weapon is sure to take him down. Make sure you know what weapons you are up against before hopping too far into the line of battle!

Zelgius's Res only sits at 18 at Lv.40. This makes it easy for magic users to take him out. Be mindful of Zelgius' positioning in relation to magical units that can easily take him out.

Zelgius - Jet-Black General Only Appears as a 5 Star Hero!

Zelgius as a Source Hero

Zelgius can be used to inherit the skill Panic Ploy 3. However, Zelgius is a powerful hero. We recommend training and investing in him instead.

How to Get Zelgius / Illustrations / Voice Actor / Quotes

Zelgius is a Hero who can be pulled from any summon.

Register as a member and get all the information you want. (It's free!)
Login
Opinions about an article or post go here.
Opinions about an article or post
We at Game8 thank you for your support.
In order for us to make the best articles possible, share your corrections, opinions, and thoughts about "Zelgius Builds and Best IVs" with us!
When reporting a problem, please be as specific as possible in providing details such as what conditions the problem occurred under and what kind of effects it had.