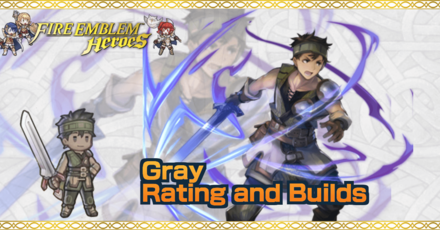 This is a ranking page for the hero Gray - Wry Comrade from the game Fire Emblem Heroes (FEH). Read on to learn the best IVs (Individual Values), best builds (Inherit Skill), weapon refinement, stats at Lv 40, and more for Gray.

Gray's best IVs are +Spd and -Res. With a +IV in Spd, Gray will be able to get more follow-up attacks on foes, as well as prevent many foes from getting a follow-up attack, allowing him to make use of his relatively high Def. If you want to increase the damage output per hit, +Atk is a good option as well.

We recommend the Special Effect Refine for Laid-Back Blade

This weapon is essentiall the uprgraded version of Zanbato+, with an additional 2 Atk, and the ability to gain +3 to all stats when Gray's HP is above 50%. On top of this, the skill can grant him another +5 to all stats, for a total of +8 to his Atk/Spd/Def/Res, when there are more foes than allies in nearby spaces. Combine this with some skills that allow Gray to gain buffs when separated from his allies, and he could make a strong solo unit.

Gray is a close physical attacker (range = 1). Therefore, when not accounting for the Weapon Triangle, the amount of damage he deals will be equivalent to his Atk minus the foe's Def stat. On top of this, Gray's weapon is effective on cavalry, and he can help other sword allies gain SP even more quickly.

Gray learns Laid-Back Blade (the upgraded version of Zanbato+), which will deal 1.5x damage to cavalry foes. Since cavalry foes are always a huge threat thanks to their mobility and unpredictability, having a unit on your team who can shut them down is always a plus.

Can gain Spd+6 with Wind Boost

The A Skill Wind Boost will give Gray Spd+6 in combat, so long as his HP exceeds the foe's by at least 3. Since Gray's Atk/Def are relatively high, a boost to 38 Spd will help him out tremendously. Keeping this skill in mind, you could try equipping Gray with a seal to boost his HP, or even go for a +HP IV. The great thing about this skill is that it will work in both player and enemy phase.

Can boost the SP of other swordies

The C skill Sword Valor 3 is really a good skill to have. When Gray goes into battle with this skill and survives, all allied sword units (including Gray) will gain an extra 2x SP, which will let you build your units much quicker. This can stack with other multipliers, like the 2x multiplier on weekends, allowing you to get 12SP when taking down a unit in the Training Tower.

Gray has a low Res stat, so he will take a lot of damage from magic attackers. A lot of mages hae pretty low HP stats, so Wind Boost may help him prevent a follow-up attack, but the attack was from a blue unit, he is pretty much guaranteed to be OHKO'd. Keep him out of the range of magic attackers as much as possible.

Should you Unlock Potential for Gray?

Gray - Wry Comrade Only Appears as a 5 Star Hero!

Gray as a Source Hero

Gray can be foddered to teach the skill Zanbato+ to another unit. Since Gray also has the valuable skill Sword Valor 3, which is great for gaining extra SP, we recommend keeping at least one Gray before using the others for fodder.

How to Get Gray / Illustrations / Voice Actor / Quotes

How to Get Gray

Gray is a Hero who can be pulled from any summon.

Register as a member and get all the information you want. (It's free!)
Login
Opinions about an article or post go here.
Opinions about an article or post
We at Game8 thank you for your support.
In order for us to make the best articles possible, share your corrections, opinions, and thoughts about "Gray Builds and Best IVs" with us!
When reporting a problem, please be as specific as possible in providing details such as what conditions the problem occurred under and what kind of effects it had.