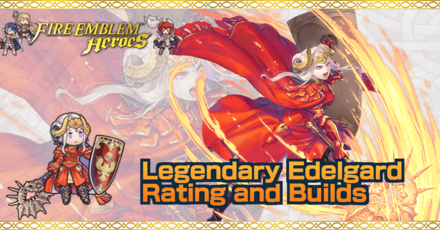 This is a ranking page for the hero Edelgard - Flame Emperor from the game Fire Emblem Heroes (FEH). Read on to learn the best IVs (Individual Values), best builds (Inherit Skill), weapon refinement, stats at Lv 40, and more for Legendary Edelgard.

The best IVs for L!Edelgard are +Atk and -Spd. An +Atk IV will enable her to deal more damge with each attack. Her Spd is already low and it isn't really important for her so it is safe to take as a bane.

We recommend a +Atk IV if merging L!Edelgard to 10. Her kit allows her to potentially do two actions in one turn, allowing her to attack two times. Having a +IV in Atk maximizes the damage you can do in 2 separate attacks

Legendary Edelgard's weapon cannot currently be refined. This section will be updated if it becomes refineable in the future!

L!Edelgard is a close physical attacker (range = 1). Therefore, when not accounting for the Weapon Triangle, the amount of damage she deals will be equivalent to her Atk minus the foe's Def stat.

L!Edelgard is able to trigger 4 separate effects from her kit when she has no allies adjacent to her. Effects vary from stat buffs, preventing enemy counterattacks, and even making additonal movements! The said condition is pretty easy to trigger. This makes L!Edelgard a very powerful at most times!

Raging Storm allows L!Edelgard an additional action if she initiates combat and there are no allies adjacent to her. Unlike Galeforce, it is not put in the special skill slot, so she can enjoy additional actions without losing access to damage dealing specials like her native Bonfire.

Additionally, if the same trigger condition is met and a beast or draonstone foe attacks, she makes a guaranteed follow-up attack. This allows her to fight the powerful colorless beast and dragonstone units, Caineghis and Fallen Tiki

L!Edelgard's C skill, Armored Stride 3, allows her to move an extra space if no allies are adjacent to her. It is much easier to trigger than the other armored mobility skill, Armor March 3 that requires another armored unit to be adjacent to the user. It is very easy to trigger and it allows L!Edelgard to move like an infantry unit while boasting the high stats of an armored unit.

The trigger conditions of Aymr, Armored Stride 3, Raging Storm and Atk/Res Solo 3 is that there must be no allies within one square. Because of this, L!Edelgard's strengths may be hard to take advantage of in small maps or maps with long 1-tile corridors like Ursula's map for Grand Hero Battles. Be mindful of L!Edelgard's positoning in relation to her allies!

L!Edelgard takes 1.5x damage from armor-effective weapons like Armorslayer+ and Rapier, and just one or two blows from this type of weapon is sure to take her down. Make sure you know what weapons you are up against before hopping too far into the line of battle!

Should you Unlock Potential for Legendary Edelgard?

Edelgard - Flame Emperor Only Appears as a 5 Star Hero!

Legendary Edelgard as a Source Hero

L!Edelgard can be used to inherit the skills Atk/Res Solo 3 and Armored Stride 3. However, L!Edelgard is a very powerful and rare legendary hero. We recommend training and building around her instead, unless you really want these skills on another unit.

How to Get Legendary Edelgard / Illustrations / Voice Actor / Quotes

How to Get Legendary Edelgard

Legendary Edelgard is a limited time Hero who can be pulled from a Legendary Hero Summoning event. They do not appear in regular summons.

Register as a member and get all the information you want. (It's free!)
Login
Opinions about an article or post go here.
Opinions about an article or post
We at Game8 thank you for your support.
In order for us to make the best articles possible, share your corrections, opinions, and thoughts about "Legendary Edelgard Builds and Best IVs" with us!
When reporting a problem, please be as specific as possible in providing details such as what conditions the problem occurred under and what kind of effects it had.