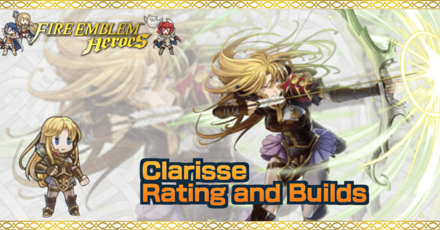 This is a ranking page for the hero Clarisse - Sniper in the Dark from the game Fire Emblem Heroes (FEH). Read on to learn the best IVs (Individual Values), best builds (Inherit Skill), weapon refinement, stats at Lv 40, and more for Clarisse.

Note: Clarisse's stats will always have no IVs.

As a hero obtainable only through Grand Hero Battle, Clarisse will always have neutral IVs by default. The only way to access IVs for this unit is through using Trait Fruits.

The best IVs for Clarisse are +Spd and -Res. A higher Spd stat allows Clarisse to get a ton of follow-up attacks on her foes. It also protects her from hostile follow-up attacks. Her Res is of less importance and thus safe to be taken as a bane.

We recommend a +Spd IV when merging Clarisse to 10. This is for the same reasons as above. At +10 merges, she can reach 41 Spd which is a range where she can score consistent follow-up attacks if she receives ample support from allies.

This is a low cost low investment build for Clarisse. Darting Blow 3 is a low cost A slot skill that will make the most of Clarisse’s Spd skill.

This build requires Life and Death 3 and Brave Bow+. While she already can attack twice with Brave Brow, her Spd stat of 34 means that with a bonus or two from allies, she can gain a folllow-up attack. A follow-up attack with Brave Bow means that she will be able to strike 4 times in battle, which is more than many foes can endure. Quickened Pulse is a good S slot option if it is available for you.

With Firesweep Bow+ and other skills that deal fixed damage, the goal of this build is to chip away at the foes’ HP. Since the foes will be unable to counterattack, Clarisse will be free to deal damage to foes on the map. In order to take down foes with Vantage, we recommend the skill Hardy Bearing in the S slot.

We recommend the Special Effect Refine for Sniper's Bow

Sniper's Bow grants Clarisse +4 Atk/Spd in combat if her HP ≥ 50%. Additionally, if her support partner is within 2 spaces of her, foes can not counterattack. This enables her to spread the AoE damage of Sniper's Bow safely. This damage can easily stack to high amounts.

For ideal support partners, we recommend units like Reyson who can both refresh and heal Clarisse. This allows for more stacks of Sniper's Bow, and the heal makes sure that her HP is always ≥ 50%.

Clarisse is a ranged physical attacker (range = 2). Therefore, when not accounting for the Weapon Triangle, the amount of damage she deals will be equivalent to her Atk minus the foe's Def stat.

Sniper's Bow inflicts -7 Atk/Spd on the target and all foes 2 spaces of it. This decreases the amount of damage they can dish out throughout their next actions and makes it easier for your allies to take them out safely.

Sniper's Bow deals 7 damage to target and all foes within 2 spaces of said target after combat. Additionally, Poison Strike 3 deals 10 damage to the primary target. Since Clarisse can be immune to counterattacks, she can chip at the enemy team's HP safely. This makes it easy for her allies to take out the weakened enemies.

Outclassed by other Bow Units

Clarisse's offensive performance is outclassed by the likes of L!Alm and Gordin, as both are full-on offensive bow units. On the other hand, balanced bow units similar to Clarrise like Norne also outclass her. If you want to utilize Clarisse, make sure to pair her with a unit that has access to debuffs to improve her firepower.

In maps that need high amounts of offensive firepower, it is wise to strategically treat Clarisse as debuff and AoE chip damage support instead of the main go-to offensive unit.

It is important to note that the fixed damage bow from Sniper's Bow and Poison Strike are not lethal damage.

Should you Unlock Potential for Clarisse?

We Recommend Unlocking Potential for Clarisse - Sniper in the Dark!

Clarisse as a Source Hero

Clarisse can be used to inherit the skill Clarisse Bow+. However, Clarisse can only be obtained from Grand Hero Battles or through Heroic Grails. This means the number of Clarisse duplicates you can obtain is limited. Think carefully before fodderring off Clarisse!

How to Get Clarisse / Illustrations / Voice Actor / Quotes

How to Get Clarisse

Clarisse is a Hero who, for a limited time, can be obtained through completing a Grand Hero Battle for the first time. They do not appear in regular summons. After the event has ended, they can be obtained by using Heroic Grails.

Register as a member and get all the information you want. (It's free!)
Login
Opinions about an article or post go here.
Opinions about an article or post
We at Game8 thank you for your support.
In order for us to make the best articles possible, share your corrections, opinions, and thoughts about "Clarisse Builds and Best IVs" with us!
When reporting a problem, please be as specific as possible in providing details such as what conditions the problem occurred under and what kind of effects it had.