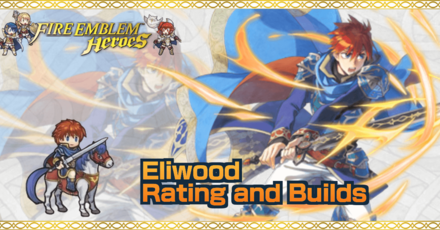 This is a ranking page for the hero Eliwood - Knight of Lycia from the game Fire Emblem Heroes (FEH). Read on to learn the best IVs (Individual Values), best builds (Inherit Skill), weapon refinement, stats at Lv 40, and more for Eliwood.

If you plan to use Durandal, the best IVs for Eliwood are +Atk and -Res. A high Atk stat will add to the +10 Atk bonus granted by Durandal. This allows Eliwood to finish off a wide variety of heroes in one hit. His Res is lower priority for him when compared to other stats, so it can be safely taken as a bane.

This will add to the Spd that both Blazing Durandal and Durandal provides makes Eliwood a deadly follow-up attacker.

This is a Galeforce build for Eliwood that also utilizes his wepaon refine. Atk/Spd Push 4 and Atk/Spd Solo 3 enhances his firepower, while Lull Atk/Spd 3 debuffs his opponent. Panic Smoke 3 will also debuff nearby enemy units after combat.

Evolving into Blazing Durandal grants +7 Spd and +10 Def in combat if Eliwood initiates attacks. This makes it easy for him to execute lots of follow-up attacks and reduce damage. It also has a built-in effect similar to Gladiator's Blade that speeds up special cooldown and slows down the enemy's special cooldown.

We also recommend the Special Effect Refine for Durandal

If damage is more important to you, then you should special refine Durandal instead as it provides an effect similar to Swift Sparrow. It grants +10 Atk and +4 Spd in total, which can be of huge help at taking down enemies in one-turn.

Eliwood is a close physical attacker (range = 1). Therefore, when not accounting for the Weapon Triangle, the amount of damage he deals will be equivalent to his Atk minus the foe's Def stat.

Durandal Can Be Evolved to Blazing Durandal

If Eliwood initiates combat with Blazing Durandal, it grants +1 cooldown charge to Eliwood, inflicts -1 cooldown charge on the foe, grants +7 Spd +10 Def, and prevents units from making follow-up attacks on Eliwood. This weapon alone makes Eliwood a great player-phase unit. It buffs Eliwood's damage and reduces the amount of damage he takes through stats and by making special attacks harder to trigger.

If Durandal is granted the special refinement effect, it grants a total of +10 Atk +4 Spd to Eliwood whenever he initiates attacks. This makes Durandal a more offensive alternative to Blazing Durandal.

Requires High Investment to be Effective

Eliwood needs a lot of investment (Feathers, Heavenly Dew, Skills) for him to become a useful unit. Make sure that you will be able to utilize Eliwood's strengths and identify which niches you would like him to fill before investing a lot on him.

Eliwood has low Def. If Eliwood is attacked or if he receives a counterattack, there is a high possibility that he will be taken out. As much as possible, make sure that you can prevent him from getting attacked by moving him out of the danger zone and finding a way to prevent counterattacks.

Eliwood is a Cavalry unit making him weak to skills against such units such as Ridersbane+. If attacked by a unit with Ridersbane+, Eliwood will take 1.5x damage. Be mindful of what skills your enemies are equipped with.

We Recommend You Unlock Potential for Eliwood - Knight of Lycia!

Eliwood as a Source Hero

Eliwood can be used to inherit the skill Ward Cavalry. Even if you don't plan on using Eliwood, it is a good idea to keep him as a Combat Manual for this skill.

How to Get Resplendent Elincia / Illustrations / Quotes

How to Get Resplendent Eliwood

Resplendent Eliwood can be obtained by buying a FEH Pass. After the distribution period has ended, they can also be purchased by FEH pass subscribers.

How to Get Eliwood / Illustrations / Voice Actor / Quotes

Eliwood is a Hero who can be pulled from any summon.

Register as a member and get all the information you want. (It's free!)
Login
Opinions about an article or post go here.
Opinions about an article or post
We at Game8 thank you for your support.
In order for us to make the best articles possible, share your corrections, opinions, and thoughts about "Eliwood Builds and Best IVs" with us!
When reporting a problem, please be as specific as possible in providing details such as what conditions the problem occurred under and what kind of effects it had.