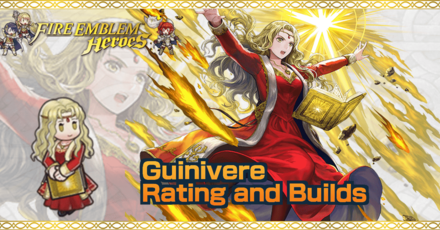 This is a ranking page for the hero Guinivere - Princess of Bern from the game Fire Emblem Heroes (FEH). Read on to learn the best IVs (Individual Values), best builds (Inherit Skill), weapon refinement, stats at Lv 40, and more for Guinivere.

The best IVs for Guinivere are +Spd and -Res. A higher Spd stat allows Guinivere to get a ton of follow-up attacks on her foes. It also protects her from hostile follow-up attacks Additionally, her Spd is a superboon so you should take advantage of that as much as possible. Her Res is monstrous so she can take a little bit of points off it as taking a Def bane would not be wise because it is a superbane. Be sure to get a merge as soon as possible though!

We recommend a +Spd IV when merging Guinivere to 10. With this IV, she will reach an absurd 48 Spd! At this range, she will be able to score follow-up attacks on most enemies even without allied support. If you want to specialize in one-shotting tome units instead, you can take a +Atk IV.

This is a high investment build for Guinivere. Instead of trying to boost her Res to make matchups with tome users better, she goes for a full-on offensive Atk/Spd build that potentially allows her to take out a lot of units if she lands a follow-up attack.

If you find that you are using Guinivere to match up with physical units a lot, this is a better build to go for as you are not using up your skill slots for Res bonuses.

This build simply requires you to slap Swift Sparrow 2 onto Guinivere to provide her with more offensive bite when initiating attacks. This makes her extra deadly to tome users, especially the slower ones.

Guinivere's weapon cannot currently be refined. This section will be updated if it becomes refineable in the future!

Guinivere is a ranged magic attacker (range = 2). Therefore, when not accounting for the Weapon Triangle, the amount of damage she deals will be equivalent to her Atk minus the foe's Res stat.

Aureola has the rare effect of being strong against magic foes. Use this to your advantage as that is a wide variety of units that Guinivere is strong against. Coupled with Atk/Res Push 4, Iceberg, Lull Atk/Res 3, Joint Drive Res, and Guinivere's decent Res stat, she makes for a strong check against many magic units! This niche ability is what Guinivere has over other tome units.

Because of Iceberg, you can choose to stack ridiculous amounts of Res onto Guinivere to improve her matchups against tome users even more.

In addition to her attacks being strong against tome units, Guinivere also has traits that make her strong against dragonstone units. Her weapon skill, Aureola, also disables adaptive damage so dragons are required to go through her massive Res stat to take her out instead of easily exploiting her mediocre Def.

Adaptive damage is when a unit calculate's damage using the lower defensive stat of a foe whether it be Def or Res.

Guinivere's A skill and B skill, Atk/Res Push 4 and Lull Atk/Res 3 work together perfectly to give her both great firepower and great resistance to magic damage. However, Atk/Res Push 4 deals 5 damage to her every time she exits combat.

This is negated by Aureola's team heal which activates every time Guinivere exits combat. The team heal heals herself and all allies within 2 spaces of her for 7 HP.

This should also make her very vulnerable to adaptive damage, but since her weapon skill disables it, you can choose not to worry about it.

Should you Unlock Potential for Guinivere?

Guinivere - Princess of Bern Only Appears as a 5 Star Hero!

Guinivere as a Source Hero

Guinivere can be used to inherit Lull Atk/Res 3 or Joint Drive Res. However, Guinivere is a very powerful hero that can provide lots of firepower for your lineups. She also makes for a great check against tome units. Please think carefully before fodderring her off.

How to Get Guinivere / Illustrations / Voice Actor / Quotes

How to Get Guinivere

Guinivere is a Hero who can be pulled from any summon.

Register as a member and get all the information you want. (It's free!)
Login
Opinions about an article or post go here.
Opinions about an article or post
We at Game8 thank you for your support.
In order for us to make the best articles possible, share your corrections, opinions, and thoughts about "Guinivere Builds and Best IVs" with us!
When reporting a problem, please be as specific as possible in providing details such as what conditions the problem occurred under and what kind of effects it had.