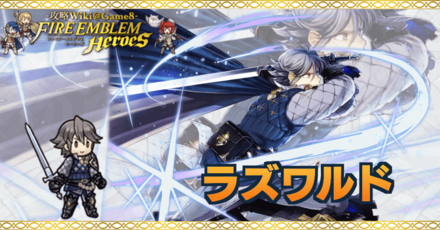 This is a ranking page for the hero Laslow - Dancing Duelist from the game Fire Emblem Heroes (FEH). Read on to learn the best IVs (Individual Values), best builds (Inherit Skill), weapon refinement, stats at Lv 40, and more for Laslow.

Laslow's best IVs are +Atk and -Res . Laslow's Spd is nothing spectacular, therefore it is better to focus on the damage output from each individual attack he deals. With his low Res stat, it might as well be used as a dump stat.

If you are planning to make a +10 merged Laslow, we recommend +Atk. With 10 merges, his base Atk will reach 42, allowing him to take out more foes with ease.

We recommend the Special Effect Refine for Laslow's Blade

If you want to refine Laslow's exclusive weapon Laslow's Blade, we recommend the Special Effect Upgrade. With the special effect upgrade, Laslow will be able to attack twice with boosted Atk/Def, provided that he is within 3 spaces of two allies who have buffs on them that add up to at least 10, making it pretty easy to trigger after using a movement assist.

Laslow is a close ranged physical attacker (range = 1). Therefore, when not accounting for the Weapon Triangle, the amount of damage he deals will be equivalent to his Atk minus the foe's Def stat. On top of that, his default skillset makes him strong against axe units and grants him HP recovery.

Laslow's exclusive weapon Laslow's Blade has an effect that grants +4 to to all stats of an ally and allies within 2 spaces of Laslow and that ally, activated when Laslow or the ally grants a movement assist to the other one. Having Laslow inherit a movement assist like Swap or Reposition will make this very easy to trigger.

Laslow has Axebreaker by default, which gives him a guaranteed follow-up attack and prevents the foe's follow-up attack when his HP exceeds 50%. If you are struggling against axe units, having a unit with this skill on your team is a quick solution.

A combination of low Spd and Res stats makes Laslow an easy target for magic attackers. Even if the foe has triangle disadvantage, they can take Laslow out easily with a follow-up attack if they are a magic attacker, so make sure he stays far away from mages and dragons.

Should you Unlock Potential for Laslow?

We Do Not Recommend Unlocking Potential for Laslow - Dancing Duelist!

Laslow as a Source Hero

Laslow can be used to inherit Axebreaker 3. This unit is easy to obtain as both a 3 Star and 4 Star hero, so be sure and create a few combat manuals if you do not want to build him.


How to Get Laslow / Illustrations / Voice Actor / Quotes

Laslow is a Hero who can be pulled from any summon.

Register as a member and get all the information you want. (It's free!)
Login
Opinions about an article or post go here.
Opinions about an article or post
We at Game8 thank you for your support.
In order for us to make the best articles possible, share your corrections, opinions, and thoughts about "Laslow Builds and Best IVs" with us!
When reporting a problem, please be as specific as possible in providing details such as what conditions the problem occurred under and what kind of effects it had.