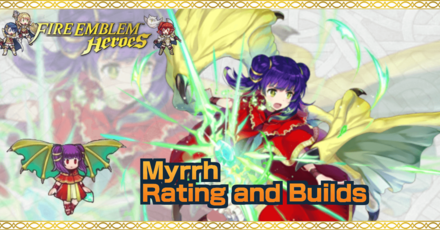 This is a ranking page for the hero Myrrh - Great Dragon from the game Fire Emblem Heroes (FEH). Read on to learn the best IVs (Individual Values), best builds (Inherit Skill), weapon refinement, stats at Lv 40, and more for Myrrh.

Myrrh's best IVs are +Def and -Spd. The effects of Great Flame rely on her having a high Def stat, so any raise in this stat would greatly benefit her. Her Spd is a rather useless stat as she depends on her Def and Great Flame to avoid follow-up attacks and damage, so it is safe to take Spd as a bane.

We recommend a +Def IV when merging Myrrh to 10. With a +Def IV, Myrrh's Spd stat will reach 43 with 10 merges. A higher Def stat allow Great Flame's effect to trigger more frequently, allowing her to stay in the battlefield longer.

We recommend the Special Effect Refine for Great Flame

The special effect refine of Great Flame is fairly easy to trigger, but the buffs are amazing as it grants +5 to all stats and it neutralizes effects that guarantee follow-up attacks. This stacks with Fury 3 and boosts Myrrh's ability as a tanky dual-phase unit.

Myrrh's Great Flame makes it so that foes cannot make follow-up attacks if Myrrh's Def ≥ foe's Def+5. This makes it hard for physical units to take down Myrrh. If you plan on investing on Myrrh, make sure to consider skills like Close Def 3 and Bracing Stance 3 to further Myrrh's ability to tank physical damage.

Myrrh's C skill, Hone Dragons, boosts adjacent dragon units' Atk/Spd by +6. It is powerful and pretty easy to trigger and this makes Myrrh a good candidate for a support unit or all-around unit in dragon-centered teams.

Myrrh takes 1.5x damage from dragon-effective weapons like Falchion, and one blow from this type of weapon is sure to take her down. She is also weak to bows and weapons that are effective against flying units. Make sure you know what weapons you are up against before hopping too far into the line of battle!

Should you Unlock Potential for Myrrh?

Myrrh - Great Dragon Only Appears as a 5 Star Hero!

Myrrh as a Source Hero

Myrrh can be used to inherit the skill Hone Dragons. However, Myrrh is a powerful unit. We recommend training and investing in her instead of fodderring her off.

How to Get Myrrh / Illustrations / Voice Actor / Quotes

How to Get Myrrh

Myrrh is a Hero who can be pulled from any summon.

Register as a member and get all the information you want. (It's free!)
Login
Opinions about an article or post go here.
Opinions about an article or post
We at Game8 thank you for your support.
In order for us to make the best articles possible, share your corrections, opinions, and thoughts about "Myrrh Builds and Best IVs" with us!
When reporting a problem, please be as specific as possible in providing details such as what conditions the problem occurred under and what kind of effects it had.