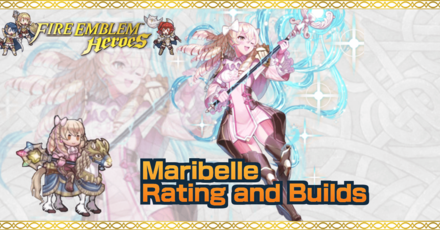 This is a ranking page for the hero Maribelle - Dire Damsel from the game Fire Emblem Heroes (FEH). Read on to learn the best IVs (Individual Values), best builds (Inherit Skill), weapon refinement, stats at Lv 40, and more for Maribelle.

The best IVs for Maribelle are +Spd and -Res. Improving her Spd means that she can both avoid follow-up atacks and score follow-up attacks of her own easily. Her Def is extremely low and she cannot afford to take a superbane in it. You should take a bane in Res instead. Take note that her Res is also a superbane so you should merge up a soon as possible to get rid of her banes!

Maribelle is a ranged magic attacker (range = 2). Therefore, when not accounting for the Weapon Triangle, the amount of damage she deals will be equivalent to her Atk minus the foe's Res stat.

Trilemma grants Triangle Adept 3 to target enemy. While this might seem good for the enemy on paper, remember that you are mostly in control on who Maribelle attacks. This means that you can attack with Maribelle if it favors your team or choose not to attack if it does not.**

Take note that this does not stack with Triangle Adept 3 that is sourced from weapons or the A slot. This effect is also still affected by Cancel Affinity 3 so watch out.

**For example, your team consists of Maribell and 3 red heroes. The enemy is composed of mostly blue heroes. In this scenario, you are mostly better off healing with Maribelle and not using Trilemma.

Can attack while stopping an enemy counterattack

Dazzling Staff will prevent an enemy from counterattacking. Being able to attack foes like Fjorm who have skills that allow them to counterattack at any range can give Maribelle a huge advantage.

Maribelle's C skill Staff Valor will allow all staff users on the same party to gain 2x SP. This will make building your other staff units and learning their skills extremely quick and painless. If done on the weekends where a 2x SP multiplier is already in effect, or when a unit is receiving some kind of 2x bonus from an event or blessing, these bonuses stack, which will allow staff units to gain a ton of SP in no time.

Maribelle's Def and Res sit at only 16 and 27 respectively. This makes her extremely fragile especially on the physical end. Her Spd is no bad, but she ill still be outsped by faster units. Try to keep her in the backlines as much as possible to keep her safe.

Because of her fragility, her assist skill is not the best fit for her as Martyr+ requires her to be in low HP ranges. We recommend inheriting skills such as Recover+ and Physic+.

Maribelle - Dire Damsel Only Appears as a 5 Star Hero!

Maribelle as a Source Hero

Maribelle can be used to inherit Trilemma+ or Dazzling Staff 3. However, Maribelle has access to a useful skill in Staff Valor 3 so you might want to wait until you get another copy before fodderring Maribelle off.

How to Get Maribelle / Illustrations / Voice Actor / Quotes

How to Get Maribelle

Maribelle is a Hero who can be pulled from any summon.

Register as a member and get all the information you want. (It's free!)
Login
Opinions about an article or post go here.
Opinions about an article or post
We at Game8 thank you for your support.
In order for us to make the best articles possible, share your corrections, opinions, and thoughts about "Maribelle Builds and Best IVs" with us!
When reporting a problem, please be as specific as possible in providing details such as what conditions the problem occurred under and what kind of effects it had.