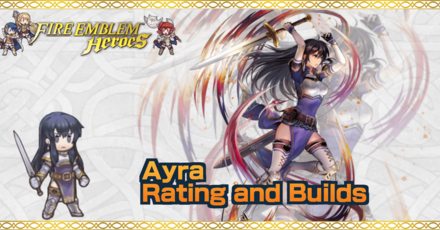 This is a ranking page for the hero Ayra - Astra's Wielder from the game Fire Emblem Heroes (FEH). Read on to learn the best IVs (Individual Values), best builds (Inherit Skill), weapon refinement, stats at Lv 40, and more for Ayra.

Ayra's recommended IVs are +Spd and -Def. Ayra's skills are all enhanced by a higher Spd stat, so this is her most important stat, and the higher the better. Ayra already has pretty decent Def so a flaw in this stat will let her maintain balance in her offensive and defensive capability.

This build is based around the effects of Fury and Galeforce. On top of having an excellent Spd stat, her weapon effect enhances her special cooldown when her Spd exceeds that of the foe. Galeforce will grant additional movement, and then Desperation’s effects will allow her to attack twice before a foe can counterattack.

This build aims to use Ayra’s default skillset as much as possible. These skills are rather synergistic, so a movement assist like Draw Back (or Reposition), and a C-skill like Threaten Spd 3 is plenty to make her a viable unit.

Letting Ayra inherit Slaying Edge+ will allow her to counterattack wither special Regnal Astra after taking one hit from the foe. The C-Slot skill used here may vary depend on what type of party you want to run, so we recommend a Drive/Spur skill or Threaten Def, etc.

Ayra's Exclusive Weapon currently cannot be refined. This section will be updated if it becomes refinable in the future.

Ayra is a close ranged physical attacker (range = 1). Therefore, when not accounting for the Weapon Triangle, the amount of damage she deals will be equivalent to her Atk minus the foe's Def stat. She also has a very powerful special skill and a skill that gives her additional Spd when initiating combat.

Ayra's stats are completely ideal for an infantry sword unit. In particular, her Spd stat paired with the effect of her exclusive weapon is incredible, and she can get a follow-up attack against most units even without any merges.

Extreme combos with her exclusive skills!

Her exclusive weapon skill Ayra's Blade and her special skill Regnal Astra have amazing synergy. Her special, which only has a cooldown count of 2, can actually be triggered more quickly thanks to her weapon skill. When her Spd stat is higher than the foe's, her special is guaranteed to trigger, so when Desperation becomes active, she becomes a killing machine.

Phantom Spd makes it even easier to activate specials

Ayra's Blade is dependent on her Spd, so the sacred seal Phantom Spd is very valuable for her. For example, Ayra, with her 40 Spd stat, equipped with Phantom Spd 3 will have her Spd treated as if it were 50, which is almost guaranteed to speed up her cooldown. (Note that Phantom Spd will not increae the damage dealt through Regnal Astra)

Ayra has a rather low Res stat, so a tome like Dire Thunder that can strike consecutively can wipe her out. Watch out for mages in general, but especially keep her out of the danger zones of blue mages.

Cannot get a follow-up attack on units with Swordbreaker

No matter how high her Spd stat is, units with Swordbreaker will be immune to her follow-up attacks. Not just that, but they will also able to double attack her in battle. If your enemy has a unit with this skill, use another ally to take them out.

Should you Unlock Potential for Ayra?

Ayra - Astra's Wielder Only Appears as a 5 Star Hero!

Ayra as a Source Hero

You may wish to inherit Swift Sparrow 2 from Ayra. However, Ayra is one very strong unit, so we recommend raising and building her over foddering her off.

How to Get Ayra / Illustrations / Voice Actor / Quotes

How to Get Ayra

Ayra is a Hero who can be pulled from any summon.

Register as a member and get all the information you want. (It's free!)
Login
Opinions about an article or post go here.
Opinions about an article or post
We at Game8 thank you for your support.
In order for us to make the best articles possible, share your corrections, opinions, and thoughts about "Ayra Builds and Best IVs" with us!
When reporting a problem, please be as specific as possible in providing details such as what conditions the problem occurred under and what kind of effects it had.