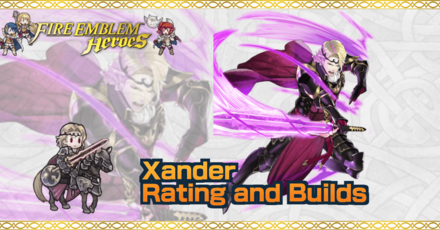 This is a ranking page for the hero Xander - Paragon Knight from the game Fire Emblem Heroes (FEH). Read on to learn the best IVs (Individual Values), best builds (Inherit Skill), weapon refinement, stats at Lv 40, and more for Xander.

As a hero obtainable only through Grand Hero Battle, Xander will always have neutral IVs by default. The only way to access IVs for this unit is through using Trait Fruits.

The best IVs for Xander are +Atk and -Spd. Xander has a mediocre Atk stat so supplementing it with an IV is one way to improve it. Do not worry about taking a bane in Spd as he can still nail follow-up attacks if you put Quick Riposte 3 onto him. Quick Riposte together with Siegfred will make Xander a decent enemy phase unit. Check out the builds section to know more.

We recommend a +Atk IV when merging Xander to 10. This is for the same reasons as above. He will be a deadly counterattacker at this point.

This is a high budget build that utilizes Siegfried's refine to boost Xander's overall firepower and defense against ranged units. With Noontime and Mystic Boost 3, Xander can keep himself healthy. You can opt for another A skill such as Atk/Def Unity if you have the fodder for it to further boost his defenses.

We recommend the Special Effect Refine for Siegfried

Siegfried's refine inflicts Atk/Def-5 on Xander's target during combat and prevents them from being able to make follow-up attacks as long as Xander's HP is ≥ 75%.

We recommend getting this refine as it gives Xander more firepower and the ability to tank more physical damage when he is attacked.

Note: Xander's stats will always have no IVs.

Xander is a close physical attacker (range = 1). Therefore, when not accounting for the Weapon Triangle, the amount of damage he deals will be equivalent to her Atk minus the foe's Def stat.

Xander is a cavalry unit with great stats against physical units. The only weak stat he has is is Res. However, if the enemy team is somehow all physical or the magical units are taken out, he becomes a big threat. We recommend taking advantage of his mobility to put him in spots that are only in reach of enemy physical units.

Siegfried allows Xander to counterattack regardless of range. This frees up the A slot for more powerful skills such as Fury 4 Check out our recommended build for Xander here!

With some investment, Xander can become a decent enemy phase unit especially against physical units.

With his weapon's refine, Xander will be able to take more physical damage from units and can retaliate and possibly one-shot when paired with a B skill like Quick Riposte 3.

Blazing Light deals fixed damage to a certain spots around the target. It is a great special in maps that have clumped up enemies like Rival Domains. It is strong against enemies that have high defenses, as it deals fixed damage regardless of Res or Def (although some skills reduce the damage taken from AoE skills). A lot of strategy can be put into using Xander's Blazing Light. You will be surprised at its true potential when used correctly.

Armored Blow 3 grants +6 Def to Xander if he initiates combat. This makes good as a player phase unit as it reduces the damage he takes from counterattacks. If you inherit skills like Ignis and Bonfire to Xander, Armored Blow 3 can also allow you to deal more damage.

Spur Def 3 grants a fair +4 Def to allies who are in combat that are adjacent to Xander. It's a flexible skill that doesn't need to meet its requirements at turn start so you can adjust the positioning of Xander and her allies before attacking foes.

Xander's Res only sits at 17 at Lv.40. This makes it easy for magic users to take him out. Be mindful of Xander's positioning in relation to magical units that can easily take him out. This also lowers the value of Siegred's built-in Distant Counter as it discourages taking hits from tome users. When taking or baiting a hit from tome user, make sure that Xander will survive the blow.

Xander has very low Spd. This makes him susceptible to follow-up attacks. This makes him very vulnerable to fast magical units. Be mindful of Xander's positioning in relation to those who pose a threat to him.

We Recommend You Unlock Potential for Xander - Paragon Knight!

Xander as a Source Hero

Xander does not possess any skills that are worth inheriting onto another unit. We recommend training and investing in him instead. If you badly need a skill from Xander, make sure that you have at least 1 more copy as he is a limited hero that can only be obtained from Grand Hero Battles or from using Heroic Grails.

How to Get Xander / Illustrations / Voice Actor / Quotes

How to Get Xander

Xander is a Hero who, for a limited time, can be obtained through completing a Grand Hero Battle for the first time. They do not appear in regular summons. After the event has ended, they can be obtained by using Heroic Grails.

Register as a member and get all the information you want. (It's free!)
Login
Opinions about an article or post go here.
Opinions about an article or post
We at Game8 thank you for your support.
In order for us to make the best articles possible, share your corrections, opinions, and thoughts about "Xander Builds and Best IVs" with us!
When reporting a problem, please be as specific as possible in providing details such as what conditions the problem occurred under and what kind of effects it had.