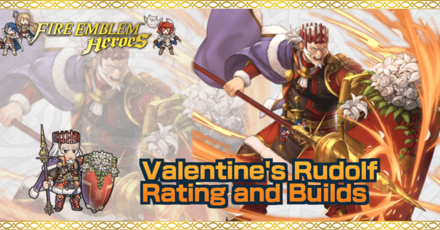 This is a ranking page for the hero Rudolf - Emperor of Rigel from the game Fire Emblem Heroes (FEH). Read on to learn the best IVs (Individual Values), best builds (Inherit Skill), weapon refinement, stats at Lv 40, and more for Valentine's Rudolf.

Rudolf's best IVs are +Atk and -Spd. When Rudolf's Atk exceeds that of his foes, he can prevent their follow-up attack and cast a penalty on them. Since a higher Atk will prevent most follow-up attacks, his Spd stat is not going to matter much, making it a perfect dump stat.

If you are planning on making a +10 merge Rudolf, we recommend +Atk. With 10 merges and an asset in Atk, plus the bonus from his weapon skill, his Atk stat will grow to 66, giving him exceptional offensive capability and allowing him to prevent most foes' follow-up attacks

Valentine's Rudolf's weapon cannot currently be refined. This section will be updated if it becomes refineable in the future!

Rudolf is a close ranged physical attacker (range = 1). Therefore, when not accounting for the Weapon Triangle, the amount of damage he deals will be equivalent to his Atk minus the foe's Def stat.

Rudolf's exclusive weapon skill Thorn Lance will inflict Atk/Def-6 on the foe and prevent them from making a follow-up attack when Rudolf's Atk is greater than their's is.

Thorn Lance will accelerate Special Cooldown, and Special Fighter 3 will allow his cooldown to speed up even further. With these two skills together, Rudolf will be able to trigger Bonfire and unleash heavy damage when he counterattacks an enemy who initiates combat.

Rufolf's C Skill Threat Atk/Def 3 will give him Atk/Def+5 and inflict Atk/Def-5 on foes within two spaces at the start of a turn. This is an extremely strong buff skill, but just be wary that the effect will only trigger if Rudolf starts within two spaces of a foe when the turn starts.

Rudolf's skills combined together make him great at tanking a foe's attacks and then hitting back hard with a counterattack. When the foe initiates combat, that foe will take an Atk/Def-6 penalty if their Atk is lower than Rudolf's, then Rudolf will counterattack with a Bonfire. If that does not finish them off, Threat. Atk/Def will lower their stats in the player phase, allowing Rudolf to finish the job.

As an armored unit, Rudolf will take 1.5x damage from weapons that are effective on armored units, such as Heavy Spear and Hammer. Be sure and check what weapons your opponents are using beforehand.

Should you Unlock Potential for Valentine's Rudolf?

Rudolf - Emperor of Rigel Only Appears as a 5 Star Hero!

Valentine's Rudolf as a Source Hero

Rudolf can be used to inherit the skills Special Fighter and Threat Atk/Def. However, as Rudolf is a rare Special Hero, think hard about your decision before you recklessly fodder him off.


How to Get Valentine's Rudolf / Illustrations / Voice Actor / Quotes

How to Get Valentine's Rudolf

Valentine's Rudolf is a limited time Hero who can be pulled from a Special Heroes Summoning Event. They do not appear in regular summons.

Register as a member and get all the information you want. (It's free!)
Login
Opinions about an article or post go here.
Opinions about an article or post
We at Game8 thank you for your support.
In order for us to make the best articles possible, share your corrections, opinions, and thoughts about "Valentine's Rudolf Builds and Best IVs" with us!
When reporting a problem, please be as specific as possible in providing details such as what conditions the problem occurred under and what kind of effects it had.