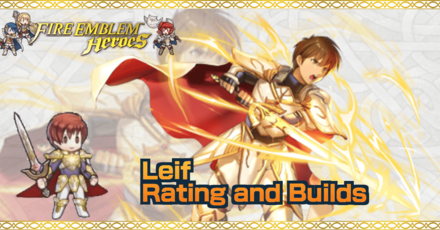 This is a ranking page for the hero Leif - Prince of Leonster from the game Fire Emblem Heroes (FEH). Read on to learn the best IVs (Individual Values), best builds (Inherit Skill), weapon refinement, stats at Lv 40, and more for Leif.

The best IVs for Leif are +Atk and -Res. Leif is an offensive attacker. Since his Spd can be is already decent and can be supplemented with Light Brand's special effect refine and Steady Blow 2, +Atk is the better offensive IV to take. With his low Res stat, it is ideal for a bane stat.

We recommend the Special Effect Refine for Light Brand

Leif is a close physical attacker (range = 1). Therefore, when not accounting for the Weapon Triangle, the amount of damage he deals will be equivalent to his Atk minus the foe's Def stat.

If the Def stat of Leif's foe is at least equal to its Res, he deals +7 pure damage to said foe. His kit and special refine effect, which you can read about above, suggests that he is best as a match-up against other physical foes. This is convenient as physical foes usually have lower Res anyway so more likely than not, you will be enjoying the pure damage boost when dealing with said match-ups. If you want to further build Leif as a match for physical foes, we strongly recommend getting his special weapon refine which is discussed in detail here!

Leif's B skill, S Drink, restores 99 HP and grants special cooldown count -1 every 1st turn. The cooldown reduction is helpful in any map. The HP restore is polarizing as it has its niche uses, but it is very helpful when it fits the situation. In Tempest Trials and in Chain Challenge wherein Leif will be entering several maps without being restored, S Drink is an amazing skill to have. If you inherit Ardent Sacrifice onto him, he will be able to heal his allies before a map ends for free as it will be made up for by S Drink!

Leif's Res only sits at 23 at Lv.40. This makes it easy for magic users to take him out. Be mindful of Leif's positioning in relation to magical units that can easily take him out.

Leif - Prince of Leonster Only Appears as a 5 Star Hero!

Leif as a Source Hero

Leif can be used to inherit the skill Drive Atk 2. However, Leif is a pretty powerful unit with 5★ exclusivity. Think carefully before fodderring him off!

How to Get Leif / Illustrations / Voice Actor / Quotes

How to Get Leif

Leif is a Hero who can be pulled from any summon.

Register as a member and get all the information you want. (It's free!)
Login
Opinions about an article or post go here.
Opinions about an article or post
We at Game8 thank you for your support.
In order for us to make the best articles possible, share your corrections, opinions, and thoughts about "Leif Builds and Best IVs" with us!
When reporting a problem, please be as specific as possible in providing details such as what conditions the problem occurred under and what kind of effects it had.