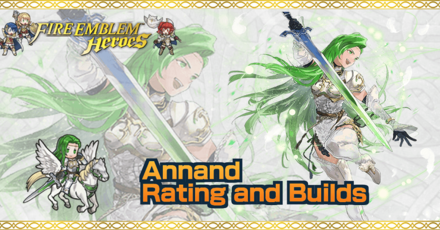 This is a ranking page for the hero Annand - Knight-Defender from the game Fire Emblem Heroes (FEH). Read on to learn the best IVs (Individual Values), best builds (Inherit Skill), weapon refinement, stats at Lv 40, and more for Annand.

We recommend a +Spd IV when merging Annand to 10. This is for the same reasons as above It is best to aim for follow-up attacks to increase her offensive ability as her Atk combined with her Def debuffs is already high. If you prefer relying on skills to increase Anannd's Spd, you can go for a +Atk IV instead.

This is a more expensive build for Annand that maximies her offenses. it is pretty easy to run as you only need to position her away from allies to get the bonuses from the skills she runs. Be warned that being adjacent to an ally completly shuts this build down!

A simple budget build for Annand. Shove is taken to make sure she can safely run Unbound Blade+ and Atk/Spd Solo 3 Sacred Seal. All additions, including Spd Smoke 3 are very inexpensive and it helps Annand in both phases of battle.

Annand's weapon cannot currently be refined. This section will be updated if it becomes refineable in the future!

Annand is a close physical attacker (range = 1). Therefore, when not accounting for the Weapon Triangle, the amount of damage she deals will be equivalent to her Atk minus the foe's Def stat.

Unbound Blade+ will nullify active enemy bonuses to Atk/Def, and simultaneously inflict Atk/Def-3. This skill is great for cancelling out skills like Fortify or Rally and increasing the damage Ephraim can output in combat while reducing the damage he takes, but keep in mind that it will have no effect on Drive/Spur bonuses.

Unlike Lull Atk/Def 3, this effect requires Annand to have no adjacent allies so keep this in mind.

In addition to the effects from her weapon skill, Annand has the skill Sturdy Impact, which gives her Atk+6 and Def+10 when initiating combat. This skill also prevents an enemy follow-up attack, and makes Annand a formidable player phase unit.

Unbound Blade and the effects of Sturdy Impact shown as the debuffs and buffs in this combat bar respectively.

Guard Bearing reduces the damage of the first attack of the first combat engagement in the enemy phase by 50%. This works well with Unbound Blade+'s damage reduction effects and both combined can make Annand a deceptively bulky unit when strategy is applied. Use these effects to your advantage to keep Annand from being taken out.

Since Sturdy Impact does not work in the enemy phase, Guard Bearing provides Ingrid with the much needed bulk she needs in said phase.

As a flying unit, Annand takes 1.5x damage from bows and weapons effective on flying units. Be sure to keep them out of the range of archers and leave them to other units.

Should you Unlock Potential for Annand?

Annand - Knight-Defender Only Appears as a 5 Star Hero!

Annand as a Source Hero

Annand can be used to inherit Sturdy Impact or Guard Bearing 3. If you are able to inherit Sturdy Blow 2 from another unit, you can get both skills from Annand! However, Annand is a powerful hero whom you can provide some firepower for your flier teams. Please think carefully before fodderring her off!

Take note that Unbound Blade+ is also inheritable. It can be a very useful piece if you decide to build around it.

How to Get Annand / Illustrations / Voice Actor / Quotes

How to Get Annand

Annand is a Hero who can be pulled from any summon.

Register as a member and get all the information you want. (It's free!)
Login
Opinions about an article or post go here.
Opinions about an article or post
We at Game8 thank you for your support.
In order for us to make the best articles possible, share your corrections, opinions, and thoughts about "Annand Builds and Best IVs" with us!
When reporting a problem, please be as specific as possible in providing details such as what conditions the problem occurred under and what kind of effects it had.