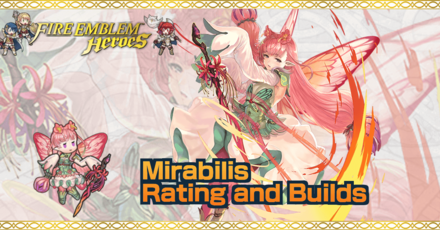 This is a ranking page for the hero Mirabilis - Daydream from the game Fire Emblem Heroes (FEH). Read on to learn the best IVs (Individual Values), best builds (Inherit Skill), weapon refinement, stats at Lv 40, and more for Mirabilis.

The best IVs for Mirabilis are +Res and -Spd. Mirabils works best as a dancer who can tank magic attacks too. A higher Res also widens the number of targets Sabotage Def 3 can affect. Her Spd is of less importance so it is safe to take it as her bane.

We recommend a +Def IV when merging Mirabilis to 10. With +10 merges and a +Def IV, Mirabilis will have balanced defenses that make her hard to take down. If you prefer a dancer that also has some offensive capabilities, you can opt for a +Atk IV instead.

Mirabilis is a close physical attacker (range = 1). Therefore, when not accounting for the Weapon Triangle, the amount of damage she deals will be equivalent to her Atk minus the foe's Def stat.

A Mythic Hero who can boost her allies' HP and Res

Mirabilis is a Mythic Hero who will also give you a Anima Blessing when summoned. During Anima Season, Mirabilis's allies who also have a Anima Blessing will receive a HP+5 and Res+5 to their stats, increasing the party's usability.

Whimsical Dream is an assist skill that allows the target ally to take another action. It also grants +5 Atk to that ally and all allies within 2 squares of target. In addition, it inflicts -5 Atk on the nearest foe within 4 spaces of the same ally plus any other foe that is within 2 spaces of that primary foe.

Whimsical Dream is a skill that may take a lot of strategy to fully utilize, but it's a powerful skill whether or not you are able to fully utlilize it. It shines best in modes like Aether Raids, Arena or Grand Hero Battles where every buff and penalty counts.

Atk/Res/Def Debuff if Foes Have Penalties

Flower of Ease, Mirabilis' weapon, inflicts -3 Atk/Res/Def to foes within 3 columns centered on unit if they have penalties active on them. Because of Whimsical Dream's wide reach, the effects of Flower of Ease can be really easy to inflict.

Def/Res Gap 3 adds +5 Def/Res to the ally unit with the highest Def + Res total in your team. This skill excludes Mirabilis, so it always gets applied to the tankiest member of your team, making her a good support for tank units.

As a flying unit, Mirabilis takes 1.5x damage from bows and weapons effective on flying units. Be sure to keep them out of the range of archers and leave them to other units.
Heroes with Effective Skills

Mirabilis' only low stat is her Spd of 18. This makes her very susceptible to follow-up attacks. Luckily, her nature as a dancer and her high-range skills allows her to stay in the backlines and still be effective. However, you should still be mindful of Mirabilis' position in relation to high-speed units as her presence is very important for your team.

Mirabilis is mainly a refresher-assist support who can compound a powerful unit's firepower and bulk so pairing her up with your most powerful units is your best bet for her!

The hole in Mirabilis' defenses is her low Spd stat. Since her Def is slightly lower than her Res stat, fast physical units can abuse. Those carrying bows also carry a damage advantage as Mirablis is a flying unit.

Mirabilis - Daydream Only Appears as a 5 Star Hero!

Mirabilis as a Source Hero

Mirabilis can be used to inherit the skills Fort. Res/Def 3 and Def/Res Gap 3. However, she is a very powerful Mythic Hero that can lead your team in Aether Raids. We recommend training and investing in her instead.

How to Get Mirabilis / Illustrations / Voice Actor / Quotes

How to Get Mirabilis

Mirabilis is a Hero who can be pulled from any summon.

>>5 I'm burning my wallet when Plumeria comes out. MY FAVORITE ALFR

>>4 It was annoying at first but now I find it funny.

Register as a member and get all the information you want. (It's free!)
Login
Opinions about an article or post go here.
Opinions about an article or post
We at Game8 thank you for your support.
In order for us to make the best articles possible, share your corrections, opinions, and thoughts about "Mirabilis Builds and Best IVs" with us!
When reporting a problem, please be as specific as possible in providing details such as what conditions the problem occurred under and what kind of effects it had.