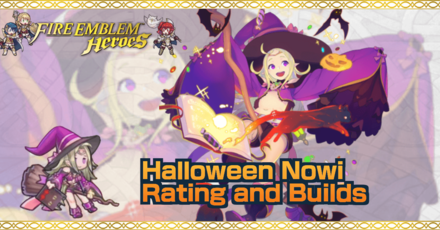 This is a ranking page for the hero Nowi - Eternal Witch from the game Fire Emblem Heroes (FEH). Read on to learn the best IVs (Individual Values), best builds (Inherit Skill), weapon refinement, stats at Lv 40, and more for Halloween Nowi.

The best IVs for Halloween Nowi are +Spd and -Def. A higher Spd stat allows Nowi to prevent follow-up attacks against her and helps her make follow-up attacks on her own. This boosts both her offensive and survivability capabilities. Her low Def is of less importance, so it is safe to take Def as a bane.

Halloween Nowi is a close magic attacker (range = 1). Therefore, when not accounting for the Weapon Triangle, the amount of damage she deals will be equivalent to her Atk minus the foe's Res stat.

Halloween Nowi is one of the few flying tome units in the game. Because of this, she is able to fill specific niches effectively. We recommend inheriting Rauðrblade+ onto her and build a flying party around her that buffs her offensive power with Goad Fliers as she already has Hone Fliers.

In fact, Halloween Nowi is the first red tome flier put into the game!

Atk/Res Bond 3 increases Nowi's Atk and Res by +5 if she is adjacent to an ally. Since it is an in-combat buff, it stacks with other combat buffs, so it is good to pair with units that have skills like Atk Tactic or Spur Def. This works very well with Hone Fliers in an all-flying team since they have similar trigger conditions.

Grimoire allows Nowi to move up to 3 spaces if her allies are positioned correctly. Combined with her flying-type mobility, she makes for an extremely mobile unit! This allows her to take out priority units and avoid units that pose great threat to her such as bow users.

As a flying unit, Halloween Nowi takes 1.5x damage from bows and weapons effective on flying units. Be sure to keep them out of the range of archers and leave them to other units.
Heroes with Effective Skills

Halloween Nowi's Def only sits at 20 at Lv. 40. Avoid attacking units that can counterattack Nowi and pay attention to her positioning in relation to units that can easily take her out. If you plan to use Halloween Nowi in all-flying parties, make sure to integrate skills like Ward Fliers.

Should you Unlock Potential for Halloween Nowi?

Nowi - Eternal Witch Only Appears as a 5 Star Hero!

Halloween Nowi as a Source Hero

Halloween Nowi can be used to inherit Hone Fliers. However, Halloween Nowi is a special hero who you can only get from special heroes banners. We generally recommend building and training her instead as she is also a strong flying tome user.

How to Get Halloween Nowi / Illustrations / Voice Actor / Quotes

How to Get Halloween Nowi

Halloween Nowi is a limited time Hero who can be pulled from a Special Heroes Summoning Event. They do not appear in regular summons.

Register as a member and get all the information you want. (It's free!)
Login
Opinions about an article or post go here.
Opinions about an article or post
We at Game8 thank you for your support.
In order for us to make the best articles possible, share your corrections, opinions, and thoughts about "Halloween Nowi Builds and Best IVs" with us!
When reporting a problem, please be as specific as possible in providing details such as what conditions the problem occurred under and what kind of effects it had.