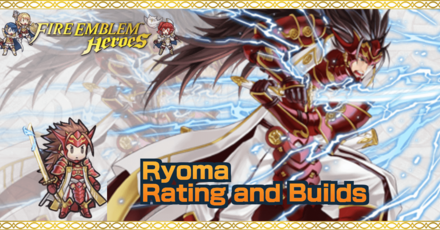 This is a ranking page for the hero Ryoma - Peerless Samurai from the game Fire Emblem Heroes (FEH). Read on to learn the best IVs (Individual Values), best builds (Inherit Skill), weapon refinement, stats at Lv 40, and more for Ryoma.

The best IVs for Ryoma are +Spd and -Res. A higher Spd stat allows Ryoma to get more of follow-up attacks on his foes. It also makes him less susceptible to follow-up attacks from foes. Since his Def is a superbane, it is best to take a Res as his bane instead. Take note that this puts his Res into very low levels so stay clear of magic units, even green ones, when using Ryoma.

This is a high budget build that takes advantage of Raijinto's refine and ups Ryoma's firepower by giving him more Atk/Spd with Swift Sparrow stacking.

We recommend the Special Effect Refine for Raijinto

We recommend getting this refine as he will be able to go toe to toe with units like Fallen Edelgard or Fallen Corrin (M).

Ryoma is a close physical attacker (range = 1). Therefore, when not accounting for the Weapon Triangle, the amount of damage he deals will be equivalent to his Atk minus the foe's Def stat.

Raijinto allows Ryoma to counterattack regardless of range and grants him Atk/Spd/Def/Res+4 and a Null Follow-Up 3 effect if it's refined.

This frees up the A slot for more powerful skills such as Fury 4 Check out our recommended build for Ryoma here!

With some investment, Ryoma can become a decent enemy phase unit especially against physical units.

Ryoma's Atk and Spd are 34 and 35 respectively. These are fair values that allow him to dish-out heavy-hitting follow-up attacks to a wide range of units.The follow-up attacks also means that he charges up Astra a bit quicker.

Astra is a very powerful special attack that boosts Ryoma's damage dealt by 150%. Ryoma can take out a wide range of units once activated. The only downside to Astra is its high cooldown count of 4. To combat this, we recommend giving Ryoma the Quickened Pulse Sacred Seal. It grants him -1 special cooldown count at the start of turn 1. This allows him to take out a priority target early on in battles.

Spd Buff for his Team

Hone Spd 3 grants +4 Spd to Ryoma's allies if they are adjacent to him at the start of the turn. The +4 Spd buff lasts for 1 whole turn. This is a great buff as it is easy to utilize and Spd is useful for most units.

Ryoma's Def and Res sit at only 27 and 21 respectively. This makes him a bit fragile especially against magic units. Be mindful of Ryoma's positioning in relation to blue or magic units that can easily take him out.

Ryoma - Peerless Samurai Only Appears as a 5 Star Hero!

Ryoma as a Source Hero

Ryoma does not possess any skills that are worth inheriting onto another unit. We recommend training and investing in him instead. If you get multiple copies of him, you can aim for a +10 merge Ryoma or send him home for some Hero Feathers.

How to Get Ryoma / Illustrations / Voice Actor / Quotes

How to Get Ryoma

Ryoma is a Hero who can be pulled from any summon.

Register as a member and get all the information you want. (It's free!)
Login
Opinions about an article or post go here.
Opinions about an article or post
We at Game8 thank you for your support.
In order for us to make the best articles possible, share your corrections, opinions, and thoughts about "Ryoma Builds and Best IVs" with us!
When reporting a problem, please be as specific as possible in providing details such as what conditions the problem occurred under and what kind of effects it had.