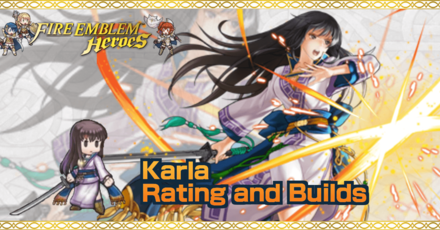 This is a ranking page for the hero Karla - Sword Vassal from the game Fire Emblem Heroes (FEH). Read on to learn the best IVs (Individual Values), best builds (Inherit Skill), weapon refinement, stats at Lv 40, and more for Karla.

The best IVs for Karla are +Spd and -HP. Karla's weapon, the Vassal's Blade, relies on her having a high Spd in order to dish-out damage. It also allows her to dish-out many follow-up attacks that greatly increase her damage output. Her HP is of less importance for her making it safe to take as her bane.

This is a general build using Karla's refined weapon that can also be used in Aether Raids. While you can normally run Moonbow on her, Ruptured Sky will help her take down pesky Fallen Edelgards, while ensuring that she doesn't get counterattacked in return due to Windsweep 3. You can run Swift Sparrow 2 as a budget option or Atk/Spd Solo 3 or 4 on her A slot. Her C skill can be either Joint Drive Attack or Joint Drive Speed if you have the fodder, though you can also run Spd Smoke 3 as a budget option.
This build will also make her score high in the Arena, but you will need to replace Reposition with a higher-scoring Assist skill. Any dual Rally skill like Rally Atk/Spd+ will do in this case.

We recommend the Special Effect Refine for Vassal's Blade

We recommend getting this refine as not only will Karla be giving herself +10 Spd at the start of combat, but will also nullify an enemy unit's guaranteed follow-up attack and effects that prevent her from performing a follow-up attack.

This allows Karla to double without fear and potentially one-shot enemy units.

Karla is a close physical attacker (range = 1). Therefore, when not accounting for the Weapon Triangle, the amount of damage she deals will be equivalent to her Atk minus the foe's Def stat.

Vassal's Blade deals bonus damage if Karla's Spd is more than her foes. The bonus damage is calculated by 70% of the difference in Spd.

With her weapon's refine, Karla is able to buff herself further with more Atk and Spd, giving herself +5 in those stats if her HP is ≥ 75%. This means that she will be able to deal more free damage that an enemy unit cannot block, regardless of their color or Def.

This effect is compatible with the Phantom Spd Sacred Seal that treats Elise as if she has +10 Spd whenever there is a Spd check.

In addition to giving herself Atk/Spd+5, the refine for Vassal's Blade will give Karla the Null Follow-Up 3 effect.

This makes her an effective offensive unit as she prevents guaranteed follow-up attacks and prevents effects that prevent her from making follow-up attacks. With this effect she can take down the most difficult units like Fallen Edelgard.

Wrath 3 speeds-up Karla's special cooldown and grants +10 pure damage to her whenever her special is activated. If you stick with Karla's native special, Draconic Aua, you will be able to shred through most enemies that does not have an abnormally high Def stat. This synergizes well with Karla's play style and kit as it requires her to stack a lot of Spd. Having a high Spd means you score follow-up attacks more often and both those attacks help in activating a Wrath-charged Draconic Aura.

Team gets a Spd boost on Even numbered turns

Karla's default C skill Even Spd Wave will grant Karla and adjacent allies Spd +6 on even numbered turns. Since this C skill actually gives the bonus to Karla and not just her allies, her weapon, Vassal's Blade, can utilize its effects and add to her damage output in said turns.

Karla's Spd is high, but both her Res and Def are very low. Look out for characters like Reinhardt, Olwen, or those who possess any kind of Brave weapons their as extra attacks ignore Spd's ability to block a second hit.

Karla - Sword Vassal Only Appears as a 5 Star Hero!

Karla as a Source Hero

Inheriting Wrath 3 or Even Spd Wave 3

Karla can be used to inherit the skills Wrath 3 or Even Spd Wave 3. Take note that both these are high-demand but rare skills. Please think carefully to whom you are fodderring these skills onto!

How to Get Karla / Illustrations / Voice Actor / Quotes

How to Get Karla

Karla is a Hero who can be pulled from any summon.

Register as a member and get all the information you want. (It's free!)
Login
Opinions about an article or post go here.
Opinions about an article or post
We at Game8 thank you for your support.
In order for us to make the best articles possible, share your corrections, opinions, and thoughts about "Karla Builds and Best IVs" with us!
When reporting a problem, please be as specific as possible in providing details such as what conditions the problem occurred under and what kind of effects it had.