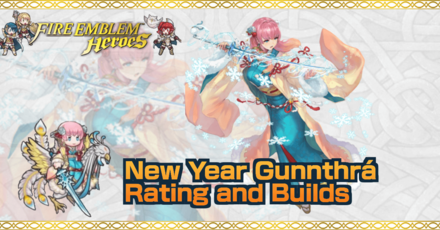 This is a ranking page for the hero Gunnthrá - Year's First Dream from the game Fire Emblem Heroes (FEH). Read on to learn the best IVs (Individual Values), best builds (Inherit Skill), weapon refinement, stats at Lv 40, and more for New Year Gunnthrá.

The best IVs for New Year Gunnthrá are +Spd and -Res. A higher Spd stat allows New Year Gunnthrá to get more follow-up attacks on her foes. It also improves her defenses by making her less susceptible to follow-up attacks. With her somewhat low defensive stats, no bane would be best, but it is better to take a -Res superbane to focus on being able to tank physical attacks better.

New Year Gunnthrá is a close physical attacker (range = 1). Therefore, when not accounting for the Weapon Triangle, the amount of damage she deals will be equivalent to her Atk minus the foe's Def stat.

Debuff to All Stats

At the start of the turn, Hikami inflicts -4 to all stats to the nearest foe within 4 spaces throughout their next actions. This debuff is very easy to trigger and gives you a huge advantage over the affected foe! However, it only affects them thrugh their next action. This means if their actions are refreshed or if they use an ability such as Galeforce, they will be able to enjoy an action without the penalties.

Spd Buff for Gunnthrá and her Team

Joint Hone Spd grants +5 Spd to Gunnthrá if she is adjacent to an ally at the start of the turn. This bonus is also granted to the allies adjacent to her. This is a great buff as it is easy to utilize and Spd is useful for most units.

As a flying unit, New Year Gunnthrá takes 1.5x damage from bows and weapons effective on flying units. Be sure to keep them out of the range of archers and leave them to other units.
Heroes with Effective Skills

Units to buff her attack power and grant additional actions

Having a support unit to increase New Year Gunnthrá's damage output is ideal. Units like L! Azura and Flying Olivia who can buff Gunnthrá's while simultaneously granting additional actions can allow her to OHKO foes.

Units who can take down blue units

New Year Gunnthrá has very low defense stats. This means that even some mid-tier blue units can easily take her out. Make sure to cover her weaknesses by pairing her with green units such as Flying Nino or Lewyn.

Since New Year Gunnthrá does not have the best damage output, it would be difficult for her to take out units with high Def stats such as Idunn and Halloween Myrrh. If they are not able to take Gunnthrá out with the counterattack, she is sure to get taken out in the next enemy phase. Pair Gunnthrá with units that can take out foes that she have a hard time dealing with.

As a flying unit, New Year Gunnthrá takes 1.5x damage from bows users such as Legendry Alm, Klein and especially Legendary Lucina who has an attribute strong against Gunnthrá's. Be sure to keep them out of the range of archers and leave them to other units.
Heroes with Effective Skills

Should you Unlock Potential for New Year Gunnthrá?

Gunnthrá - Year's First Dream Only Appears as a 5 Star Hero!

New Year Gunnthrá can be used to inherit the skill Joint Hone Spd. However, since New Year Gunnthrá is a powerful special hero that you can only obtain from a special heroes banner, we recommend training and building her instead. If you do choose to fodder her off regardless, keep in mind that Joing Hone Spd is a very rare skill.

How to Get New Year Gunnthrá / Illustrations / Voice Actor / Quotes

How to Get New Year Gunnthrá

New Year Gunnthrá is a limited time Hero who can be pulled from a Special Heroes Summoning Event. They do not appear in regular summons.

Register as a member and get all the information you want. (It's free!)
Login
Opinions about an article or post go here.
Opinions about an article or post
We at Game8 thank you for your support.
In order for us to make the best articles possible, share your corrections, opinions, and thoughts about "New Year Gunnthrá Builds and Best IVs" with us!
When reporting a problem, please be as specific as possible in providing details such as what conditions the problem occurred under and what kind of effects it had.