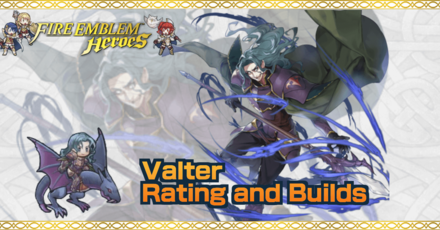 This is a ranking page for the hero Valter - Dark Moonstone from the game Fire Emblem Heroes (FEH). Read on to learn the best IVs (Individual Values), best builds (Inherit Skill), weapon refinement, stats at Lv 40, and more for Valter.

Note: Valter's stats will always have no IVs.

As a hero obtainable only through Grand Hero Battle, Valter will always have neutral IVs by default. The only way to access IVs for this unit is through using Trait Fruits.

The best IVs for Valter are +Atk and -Res. Valter's main stat is Atk so you should maximize it as much as possible with this IV. This helps him in taking out a wide range of foes in one hit. His Res is very low and is of less importance to it can be safely taken as a bane.

We recommend a +Spd IV when merging Valter to 10. At +10 Merges, Valter's Atk will reach such high levels that pushing it up higher is a waste, especially if you merge him up, use dragonflowers or inherit skills onto him. At this point, it would be better to opt with a +Spd IV instead to help him take less follow-up attacks and allow him to make some follow-up attacks on his own. With this IV, he reaches 40 Spd if you include Cursed Lance's effects. With a skill like Hone Fliers or Goad Fliers, this Spd level is enough to nail follow-up attacks on most of the units in the game.

We recommend the Special Effect Refine for Cursed Lance

Any Cursed Lance upgrade strengthens the deault effect of Cursed Lance. Upon upgrade, its primary effect will now be identical to Fury 3.

The special effect refine is described below:

Then, Cursed Lance will activate the following:

Since you only have to meet at least one of the trigger conditions and the former can easily be met through Cursed Lance's self-damage and the latter can be met through Panic Ploy 3, not only are the effects very powerful, but they are easily accessible as well. This is a must get upgrade as it provides so much power to Valter without having very complex trigger conditions.

Valter is a close physical attacker (range = 1). Therefore, when not accounting for the Weapon Triangle, the amount of damage he deals will be equivalent to his Atk minus the foe's Def stat.

Valter's weapon, Cursed Lance, grants +2 Atk/Spd and accelerates his special trigger by 1 counter at the cost of inflicting 4 HP to Valter after every battle. Not to mention, Cursed Lance has a fair Mt of 16! This makes the HP penalty well worth it and you can even turn the penalty into an advantage if you inherit Desperation onto Valter.

Check out our recommended builds for Valter!

Panic Ploy 3 converts units' bonuses in Valter's cardinal directions into penalties, meaning all positive stat boosts turn into negative stat reductions. This affects all units in spaces above, below, to the right, or to the left of Valter. With his fairly high HP, this is a powerful skill for Valter, since it is easy for him to debuff many enemy units with lower HP. This skill is a hard counter to teams running Blade tomes! Those units are highly reliant on buffs to increase their attack power and this skill neutralizes all that if Valter wins the HP check. If you need more HP, try slapping a Sacred Seal like Squad Ace A 3 onto Valter.

The HP requirement also makes a 5★ Valter a good candidate for Summoner Support as he greatly benefits from the +5 HP. Be warned though as increasing Valter's HP makes it harder for Cursed Lance to trigger something like Desperation.

Valter's Res only sits at 19 at Lv.40. This makes it easy for magic users to take him out. Be mindful of Valter's positioning in relation to magical units that can easily take him out.

Watch out especially for Merric as his green tome, Excalibur is strong against flying units. He is truly Valter's worst nightmare as even the weakest Merric can take out a highly-invested Valter.

As a flying unit, Valter takes 1.5x damage from bows and weapons effective on flying units. Be sure to keep them out of the range of archers and leave them to other units.

Should you Unlock Potential for Valter?

Valter as a Source Hero

Valter can be used to inherit the skill Panic Ploy 3. However, you can only acquire Valter from Grand Hero Battles or from using Heroic Grails, so think carefully before foddering him off.

How to Get Valter / Illustrations / Voice Actor / Quotes

How to Get Valter

Valter is a Hero who, for a limited time, can be obtained through completing a Grand Hero Battle for the first time. They do not appear in regular summons. After the event has ended, they can be obtained by using Heroic Grails.

Register as a member and get all the information you want. (It's free!)
Login
Opinions about an article or post go here.
Opinions about an article or post
We at Game8 thank you for your support.
In order for us to make the best articles possible, share your corrections, opinions, and thoughts about "Valter Builds and Best IVs" with us!
When reporting a problem, please be as specific as possible in providing details such as what conditions the problem occurred under and what kind of effects it had.