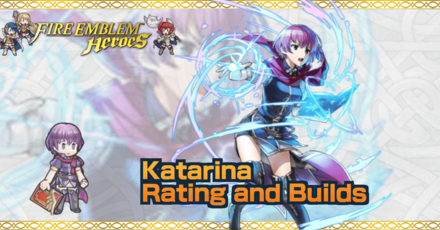 This is a ranking page for the hero Katarina - Wayward One from the game Fire Emblem Heroes (FEH). Read on to learn the best IVs (Individual Values), best builds (Inherit Skill), weapon refinement, stats at Lv 40, and more for Katarina.

The best IVs for Katarina are +Spd and -HP. Katarina's Spd stat is around 34 which is around average. A +Spd IV helps her outspeed alot of the units that are in this Spd range so this IV is extremely helpful for her. Her HP is of less importance so it is safe to take it as a bane.

We recommend the Special Effect Refine for Reese's Tome

We strongly recommend getting the special effect refine for Reese's tome. Katarina can easily take advantage of this because she has a very high Res stat. Additionally, it synergizes well with Atk Ploy 3. This synergy is discussed below. Click here to go to Katarina's Strengths and Weaknesses section!

Katarina is a ranged magic attacker (range = 2). Therefore, when not accounting for the Weapon Triangle, the amount of damage she deals will be equivalent to his Atk minus the foe's Res stat.

Besides her abysmal Def, Katarina boasts excellent base stats. If she is able to prevent herself from taking hits from physical units, she will be a powerhouse in every map you put her in to.

With the A skill Swift Sparrow 2, Katarina gains Atk/Spd+4 when she initiates combat. This will make it easier for her to gain follow-up attacks, and allow her to deal even more damage, making it very versatile and easy to use.

Katarina can inflict a total debuff of -4 Spd/Res -5 Atk on foes in cardinal directions if her Res is more than in-range units. This comes from the combination of Atk Ploy 3 and her Reese's Tome if it is specially refined. A massive debuff with a very long range can not be underestimated. We strongly recommend getting the special refinement effect for Reese's Tome if you plan to use Katarina in the long run.

Katarina's Def only sits at 15 at Lv. 40. Be mindful of her positioning in relation to physical units that can easily take her out. Make use of her high firepower to take out priority enemy units before they can engage Katarina.

On the flipside, Katarina has decent Spd and Res. Under normal conditions, magic units would not pose much of a threat to her.

Should you Unlock Potential for Katarina?

Katarina - Wayward One Only Appears as a 5 Star Hero!

Katarina as a Source Hero

Summer Ingrid can be used to inherit Swift Sparrow 2 or Atk Ploy 3. However, Katarina is only available at 5★ so please think carefully before fodderring her off.

How to Get Katarina / Illustrations / Voice Actor / Quotes

How to Get Katarina

Katarina is a Hero who can be pulled from any summon.

Register as a member and get all the information you want. (It's free!)
Login
Opinions about an article or post go here.
Opinions about an article or post
We at Game8 thank you for your support.
In order for us to make the best articles possible, share your corrections, opinions, and thoughts about "Katarina Builds and Best IVs" with us!
When reporting a problem, please be as specific as possible in providing details such as what conditions the problem occurred under and what kind of effects it had.