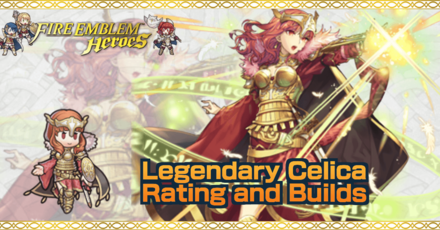 This is a ranking page for the hero Celica - Queen of Valentia from the game Fire Emblem Heroes (FEH). Read on to learn the best IVs (Individual Values), best builds (Inherit Skill), weapon refinement, stats at Lv 40, and more for Legendary Celica. 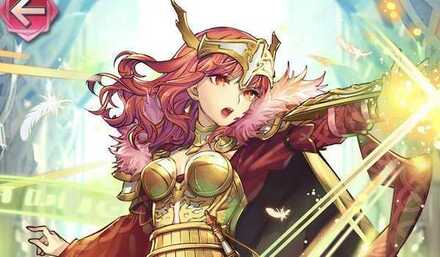 L!Celica's best IVs are +Spd and -HP. With her super boon, she will gain +4 to her Spd stat, maximizing her already impressive speed. Although she has super banes in all of her Defensive stats, meaning she will take -4 with a flaw, -HP is still better than a flaw in Def or Res.

+Atk if you want to merge

If you are planning on getting a +10 merge L!Celica, +Atk is the best boon. With a +10 merge and the bonus from her weapon skill, Celica's Spd will already be at 45, and since there is really no reason to go higher than that, the extra stat boost would be better if put toward damage output in the form of her Atk stat.

This build revolves around Atk/Spd Push 4. Atk/Spd Push will raise Celica's Spd and Atk while decreasing her HP, making the effects of Soul of Zophia and Brazen Atk/Spd easier to trigger. The basic point of this build is to make it easier to manager Celica's HP while simultaneously maxing her stats to increase her combat potential.

This build is just a slight upgrade of L!Celica's default skillset. With Flashing Blade and Moonbow equipped, Celica will always be able to activate Moonbow during her follow-up attack, granted her Spd is higher than the foe's. In order to trigger Atk/Spd Oath 3, be sure and end the turn with her adjacent to an ally.

L!Celica is a ranged magic attacker (range = 2). Therefore, when not accounting for the Weapon Triangle, the amount of damage she deals will be equivalent to her Atk minus the foe's Res stat.

As a legendary hero, L!Celica receives a Fire Blessing by default when summoned. Being a fire-type Legendary Hero means that during Fire Season, fire-blessed heroes will gain HP+3, and L!Celica's effect will make her base stats be treated as 175. This effect makes it easy to raise your arena score when playing her on your team.

Can deal more damage to foes with higher Res stats

L!Celica's Exclusive Weapon Skill Saintly Seraphim will deal damage equal to 25% of foe's Res stat. Since mages often struggle against Res tanks, this weapon skill is extremely powerful in the fact that it can deal fixed damage to this type of opponent.

Has a more powerful version of Desperation

L!Celica's Exclusive Skill Soul of Zofia combines the effects of Null Follow-Up 3 and Desperation 3 into one. This means she can block skills that prevent follow up attacks while gaining a follow-up attack before an enemy can counterattack. Foes with Wary Fighter will not be able to stop her from getting a follow-up, making them much easier to take down.

Can raise her Atk/Spd, as well as that of her allies'

L!Celica's C Skill Atk/Spd Oath 3 will raise the Atk/Spd of her and a nearby ally by +5 if they start the turn in adjacent spaces. This powerful skill raises the offensive ability of two party members simultaneously. In particular, this buff can be used on allies with Bonus Doubler or Blade-Weapons to give them a significant buff.

Generally speaking, L!Celica will want to attack foes and then retreat to safety. If a powerful physical attacker such as Tibarn or Picnic Flora initiates battle with L!Celica or counterattacks her, it could spell the end, so let her teammates take care of these heroes for her.

Flayn provides great heals, damage reduction, and movement-assist to Legendary Celica. She is a very powerful support unit! If you do not have Flayn, any other healer can do. Refresher-assist supports are great partners for Legendary Celica too.

Reyson and Leanne provide both heals and refreshes to Legendary Celica so she can brawl it out in the frontlines for much longer. Arguably, Leanne is a better pick as she is of a different attribute to Legendary Celica. Both can be blessed as they are neutral units! They can accompany Celica in the Arena if you want them to.

Blue powerhouses, preferably those who are strong against red units

Legendary Celica needs a partner to cover her weakness against red units. It might be smart to include a blue magic unit as well to cover foes that are strong against physical hits. Some good example for this spot are Reinhardt, Brave Hector, or even an offensively built Peony.

Legendary Celica has great stats across the board except for her Def stat.

Altina, and Winter Altina can nail double strikes on her without the need for a Spd check so they are very deadly against Legendary Celica. Their access to Vantage effects also counter Soul of Zofia directly. Young Caeda also has native access to a Vantage effect.

Celica - Queen of Valentia Only Appears as a 5 Star Hero!

Legendary Celica as a Source Hero

L!Celica can be used to inherit Swift Sparrow 3 and Atk/Spd Oath. However, as she is a very powerful and rare Legendary Hero, we recommend keeping and building at least one L!Celica before foddering any extras off.

How to Get Legendary Celica / Illustrations / Voice Actor / Quotes

How to Get Legendary Celica

Legendary Celica is a limited time Hero who can be pulled from a Legendary Hero Summoning event. They do not appear in regular summons.

Register as a member and get all the information you want. (It's free!)
Login
Opinions about an article or post go here.
Opinions about an article or post
We at Game8 thank you for your support.
In order for us to make the best articles possible, share your corrections, opinions, and thoughts about "Legendary Celica Builds and Best IVs" with us!
When reporting a problem, please be as specific as possible in providing details such as what conditions the problem occurred under and what kind of effects it had.