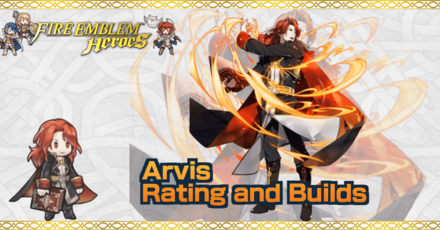 This is a ranking page for the hero Arvis - Emperor of Flame from the game Fire Emblem Heroes (FEH). Read on to learn the best IVs (Individual Values), best builds (Inherit Skill), weapon refinement, stats at Lv 40, and more for Arvis.

Note: Arvis's stats will always have no IVs.

As a hero obtainable only through Grand Hero Battle, Arvis will always have neutral IVs by default. The only way to access IVs for this unit is through using Trait Fruits.

The best IVs for Arvis are +Res and -Def. Arvis is not built to take blows from physical units to begin with so having some points off his Def would not harm his viability significantly. With that, you should maximize his Res as much as possible as he is very strong in that side of defense. Another reason to maximize his Res is because of Valflame which relies on Arvis having a high Res stat.

Take note that his Def is a superbane so you should get that merge as fast as possible!

We recommend a +Spd IV when merging Arvis to 10. This is for the same reasons as above. With this IV, he will reach a Res stat of 55 which is very fair even by modern standards. This allows you to tank magic hits and debuff a lot of enemies.

This build is one that does not require too much investment. By inheriting Triangle Adept, Arvis’s power will greatly increase against green units, which should help him cover his mediocre Spd stat. Additionally, giving him Swordbreaker will let him gain easy follow-up attacks against sword units, further increasing the battles where he is at an advantage. His C skill can be used to debut the opponent, or instead to raise your allies’ Atk as you see fit. This build may be changed around and kept flexible, such as swapping out his B skill for Recover Ring on a multi-map battle.

This is build based around Rauðrblade and Fury. With his balanced stats, Arvis can be deployed as your team’s Red Tome Ace. A C Slot skill such as Hone or Fortify can be used to buff your allies and constantly keep up their firepower.

This build is specifically designed to use in multi-map battles. Breath of Life can be stacked to enhance its healing effects on your allies. This is a defensive build that aims to constantly restore HP to both the unit and the unit’s allies.

We recommend the Special Effect Refine for Valflame

Upon the special effect refine, Valflame will inflict a more powerful debuff on enemies. That is the upgrade bonus, but the special effect refine adds the total number of penalites to Arvis' Atk stat. Considering that Arvis has a handful of debuffs that already weaken the enemy, this effect capitalizes on said debuffs and grants Arvis a wide window to take out weakened foes.

Arvis' debuffs are very easy to apply so you will not have any problem utilizing this effect. Take note that even debuffs from other units will be considered! Run a team composed of debuffers and Arvis will surely hit very hard.

Arvis is a ranged magic attacker (range = 2). Therefore, when not accounting for the Weapon Triangle, the amount of damage he deals will be equivalent to his Atk minus the foe's Res stat.

Arvis's exclusive weapon Valflame inflicts a -4 Atk and Res debuff to foes with lower Res than him. Alongside Def Ploy, this is cast in all cardinal directions, so the range of this effect is very powerful. Foes with low Res stats will be further weakened to a point where they can easily be OHKO'ed.

Valflame has access to a powerful special effect refine. It adds the total number of debuffs on the enemy to Arvis' attack stat. You can read more about it in the weapon refine section.

Excellent synergy between weapon and special

He can damage foes over a wide range, thanks to his special skill Growing Flame. His weapon Valflame lowers the Res of multiple foes, so inflicting damage to multiple foes with lowered Res has a strong outcome.

His exclusive skill Recover Ring lets him recover 10 HP at the start of every turn. Thanks to Recovery Ring, Arvis can survive a long time as long as he is able to keep just a bit of HP. Arvis will inflict penalties on the enemy by simply being there, so it is also possible to use him in this role.

Lowers the Def stat of enemies in all cardinal directions

His default B slot skill Def Ploy 3 will inflict Def-5 on foes with Res that is lower than his. Combine that with his exclusive weapon for an Atk/Res -4 and Def -5 debuff inflicted on ther foe all at once. With these powerful debuffs, you can assign him this particular role and leave the debuffing to Arvis

Rather frail against physical attacks

Arvis's HP and Def are nothing special, meaning that he is rather vulnerable to physical attacks. The chances of him getting attacked and subsequentially OHKO'ed by some sword or lance unit are pretty high, so keep him out of their danger areas and have your bulkier units cover him.

Struggles against other high Res units

He can only simultaneously cast 3 debuffs on units with a Res stat of 32 or lower. Ploy skills are dependent on the foe's Res stat, so high Res units like Yune or Deirdre will be totally safe from his debuffs.

Should you Unlock Potential for Arvis?

We Recommend Unlocking Potential for Arvis - Emperor of Flame!

Arvis as a Source Hero

You may wish to use Arvis as a source for Def Ploy 3. However, since Arvis is obtained via Grand Hero Battle, the amount of duplicates you can obtain are limited. Think hard about whether or not you do not want this unit before using him as fodder.

How to Get Arvis / Illustrations / Voice Actor / Quotes

How to Get Arvis

Arvis is a Hero who, for a limited time, can be obtained through completing a Grand Hero Battle for the first time. They do not appear in regular summons. After the event has ended, they can be obtained by using Heroic Grails.

Register as a member and get all the information you want. (It's free!)
Login
Opinions about an article or post go here.
Opinions about an article or post
We at Game8 thank you for your support.
In order for us to make the best articles possible, share your corrections, opinions, and thoughts about "Arvis Builds and Best IVs" with us!
When reporting a problem, please be as specific as possible in providing details such as what conditions the problem occurred under and what kind of effects it had.