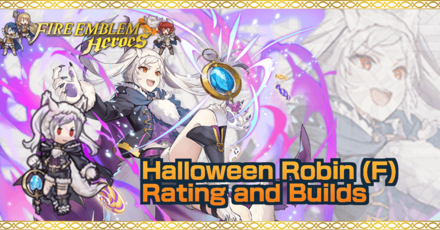 This is a ranking page for the hero Robin - Fall Vessel from the game Fire Emblem Heroes (FEH). Read on to learn the best IVs (Individual Values), best builds (Inherit Skill), weapon refinement, stats at Lv 40, and more for Halloween Robin (F).

The best IVs for Halloween Robin (F) are +Atk and -Spd. It is important to increase Robin's attack as she is mainly an offensive unit and she already has measures to decrease the damage she takes from enemies. Additionally, her Atk is a superboon so you should take advantage of it as much as possible. Her Spd is very unreliable and is of less importance so it can be safely taken as a bane. Be wary as this is a superbane!

We recommend a +Atk IV when merging Halloween Robin (F) to 10. This is for the same reasons as above. At this point, she can take out lots of units with 1 hit.

You can also make an argument that Robin's Atk at this point is absurdly high and that you can get a +Res IV instead to take advantage of the superboon in said stat. What you get is an offensive enemy phase unit that can take lots of hits from magic foes!

This is a budget build for Halloween Robin (F) with minimal Skill Inheritance. Her default kit is already workable and Mirror Stance 2 just makes her tankier.

Halloween Robin (F) is a close magic attacker (range = 1). Therefore, when not accounting for the Weapon Triangle, the amount of damage she deals will be equivalent to her Atk minus the foe's Res stat.

In addition to granting Distant Counter and adaptive damage against ranged foes, Moonless Breath grants a very powerful defensive effect that jives well with the rest of Robin's kit. As long as she is within 2 spaces of an ally and she lands a hit with her special, she restores 30% of her health back. Combined with the low-cooldown Noontime that also heals Robin, she makes for a very durable unit.

Because of Moonless Breath, Noontime and the rest of her kit, Robin can take lots of attacks without going down. Assess enemy danger zones and try leaving her in zones which are not lethal for her. Rapid heals from her kit will make sure she soaks up the damage well.

Since Noontime only has a cooldown of 2, Dragonscale allows for a Noontime activation upon Robin's counterattack. Considering that Moonless Breath grants Distant Counter and also provides healing effects, it can be said that this B skill is perfect for Halloween Robin (F)'s Moonless Breath.

The real value of this skill is its synergy with Robin's kit! She is already a very solid enemy phase unit because of Moonless Breath and Dragonscale, but this skill puts the nail in the coffin. Have confidence that even a base kit Halloween Robin (F) will perform very well as an enemy phase unit.

Halloween Robin (F) takes 1.5x damage from dragon-effective weapons like Falchion or Naga, and one blow from these types of weapons is sure to take her down. Make sure you know what weapons you are up against before hopping too far into the line of battle!

Weak to bows if Dragonscale is swapped out

As also a flying unit, Halloween Robin (F) takes 1.5x damage from bows and weapons effective on flying units. Be sure to keep them out of the range of archers and leave them to other units.

You do not need to worry about this if you choose to keep Dragonscale on your base kit as it neutralizes attacks that are strong against flying units.

Robin - Fall Vessel Only Appears as a 5 Star Hero!

Halloween Robin (F) can be used to inherit Dragon's Ire 3 or Goad Dragons. However, Halloween Robin (F) is a very powerful special hero whom you can only get from specific banners. Please think carefully before fodderring her off.

How to Get Halloween Robin (F) / Illustrations / Voice Actor / Quotes

How to Get Halloween Robin (F)

Halloween Robin (F) is a limited time Hero who can be pulled from a Special Heroes Summoning Event. They do not appear in regular summons.

Register as a member and get all the information you want. (It's free!)
Login
Opinions about an article or post go here.
Opinions about an article or post
We at Game8 thank you for your support.
In order for us to make the best articles possible, share your corrections, opinions, and thoughts about "Halloween Robin (F) Builds and Best IVs" with us!
When reporting a problem, please be as specific as possible in providing details such as what conditions the problem occurred under and what kind of effects it had.