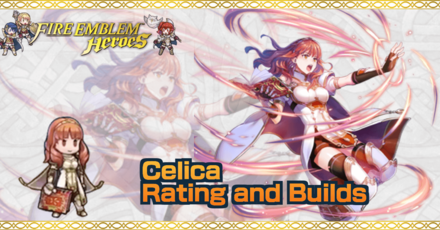 This is a ranking page for the hero Celica - Caring Princess from the game Fire Emblem Heroes (FEH). Read on to learn the best IVs (Individual Values), best builds (Inherit Skill), weapon refinement, stats at Lv 40, and more for Celica.

The best IVs for Celica are +Spd and -Def. A higher Spd stat allows Celica to prevent follow-up attacks against her and help her make follow-up attacks on her own. This boosts both her offensive and survivability capabilities. Her low Def is of less importance, so it is safe to take Def as a bane. Sincer her Def and Res stats are equal, you can also opt for a -Res bane if you prefer Celica to be tankier against physical attacks.

This build uses the refined version of Ragnarok and the stacked effects of Brazen Atk/Spd. As long as you can keep Celica at the appropriate HP threshold, you should be able to OHKO just about any foe, so use Ardent Sacrifice or some other method to ensure you can destroy everything that crosses Celica.

This build is based around using Renewal and Noontime to easily trigger the effects of Ragnarok. Since she will regenerate 10 HP at the start of every turn, this build will do well in multi-map battles like Tempest Trials, etc.

We recommend the Special Effect Refine for Ragnarok

Becasue of this, it is a good idea to inherit Brazen Atk/Spd 3 onto her or equip her the Sacred Seal equivalent for it as she can easily reach Brazen HP range with Ragnarok.

Celica is a ranged magical attacker (range = 2). Therefore, when not accounting for the Weapon Triangle, the amount of damage she deals will be equivalent to her Atk minus the foe's Res stat.

Celica's weapon, Ragnarok, adds +5 Atk/Spd at the start of combat as long as Celica is at 100% HP. It inflicts damage to her after combat so she does not keep the buff for long. Make sure to pair her up with healers so that she can enjoy the buff at every encounter.

Ragnarok's special refinement drops the 100% HP requirement and adds the effects of Brazen Atk/Spd 3. This makes Celica a bit easier to use as you do not need to rely on heals to consistenly put her offensive stats to high levels. However, it still keeps the damage inflcited onto Celica after combat, but this is good for her as it can be utilized to conveniently reach the Brazen effects without deliberately baiting attacks from opponents or relying on skills like Reciprocal Aid

Distant Def 3 grants Celica +6 Def/Res in combat if she is attacked by ranged foes. This means that she is a good match-up against foes who use daggers, bows, tomes and staves.

Celica has rather low defenses and the only skill that can help her with her durability is Distant Def 3 which only works against ranged attacks. This means that Celica will have trouble taking damage from melee attacks like swords and dragonstones.

Celica - Caring Princess Only Appears as a 5 Star Hero!

Celica as a Source Hero

Celica can be used to inherit the skill Distant Def 3. However, Celica is a strong hero who has a very good special refinement effect. We recommend training and investing in her instead.

How to Get Celica / Illustrations / Voice Actor / Quotes

How to Get Celica

Celica is a Hero who can be pulled from any summon.

Register as a member and get all the information you want. (It's free!)
Login
Opinions about an article or post go here.
Opinions about an article or post
We at Game8 thank you for your support.
In order for us to make the best articles possible, share your corrections, opinions, and thoughts about "Celica Builds and Best IVs" with us!
When reporting a problem, please be as specific as possible in providing details such as what conditions the problem occurred under and what kind of effects it had.