This is an article on the best teams to use in Arena. If you want to know which units will work well in Arena offense, as well as general tips for building an Arena defense team, read on!

The Arena is one of the best ways to earn rewards such as orbs, feathers, trait fruits, and divine codes.

While generally, you can pick any unit you want to build for your Arena team, these are some general tips that will help if you want to score higher and reach higher tiers for more rewards.

The teams listed below do not only score high if invested in, but are some of the best combinations of units to have in Arena offense and defense.

What most players will do is build an Arena core team - that is, use the same 3 units for a season and leave the last slot empty for the bonus unit.

This is why building several core teams according to season is essential, as after that, you can just swap them out once the season is over.

You can also try to stick to one core team and then make some changes once a season passes (such as their blessings, or the Mythic or Legendary Hero they are deployed with).

Pick your units, build them up, and then rotate them every season to gain maximum points!

The Leftmost Unit in Your Defense Team is Important

We can swap Legendary Dimitri and Ninja Hana's positions to trick opponents into choosing to fight our team.

You can designate which is your Arena defensive team through the Edit Teams tab in the Allies menu.

Be careful which unit you set on the leftmost slot, as this is the unit that will be seen by those battling in the Arena.

Putting a really strong unit in that slot, such as Brave Edelgard may cause those potential opponents to not want to fight your team, so you may want to consider putting in a weaker unit to trick them into thinking that your team is easily defeated.

Use Premium Fodder and Merge Your Units

The general way to score as much as possible is to merge your units as much as you can and to give them premium skills.

For instance, while a Valentine's Gustav has a base BST (Base Stats Total) of 185, a +10 Legendary Dimitri will score higher.

Giving your units premium skills such as Ruptured Sky, Distant Counter, or Special Spiral 3 increases their Arena scoring potential as the game also takes into account the base SP price of a unit's skills. So generally, the higher the price of the skill, the higher it will score.

What is BST and why does it matter?

Base Stats Total (BST) is the total of all unit stats minus weapons and skills.

A general rule of thumb is that units with the highest BST are armored units while the lowest are cavalry.

Merging units will increase their BST, hence why they have the potential to score really high in the Arena.

While the mobility of cavalry units seem good to have in Arena, generally speaking, they have the worst BST and thus the lowest scoring potential.

The exceptions are Legendary Heroes such as Legendary Eliwood and Legendary Leif, who not only have premium skills, but are also grant their allies bonuses to their stats if they are deployed in their specific seasons.

Other exceptions are duo units such as Valentine's Líf and Masquerade Sigurd due to the effect of their Duo skills. 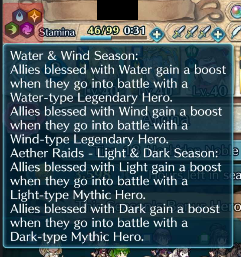 As previously mentioned, Mythic and Legendary Heroes come with their own blessings and grant bonus stats to their allies when deployed alongside them in battle.

What you can do per season is to put a Legendary or Mythic Hero in your team, then bless the rest of your units according to that Hero's blessing to grant them their bonuses.

Keep in mind that this works for both offense and defense teams!

These teams have the potential to be the highest scoring teams when heavily invested in, and can work in both offense and defense.

Please note that these teams do not take into account any Duel skills such as B Duel Flying 3 or R Duel Infantry 3.

Arguably, two of the best units in the game right now are Ninja Lyn and Summer Byleth.

Ninja Lyn's weapon, Tailwind Shuriken not only allows her to attack twice when she initiates combat, but also accelerates her special trigger and debuffs enemy units.

In the meantime, Summer Byleth's weapon, Sun's Percussors, neutralizes enemy unit skills that guarantee their follow-up attacks and effects that prevent her from following-up attacks.

New Year Peony does not suffer from the plight of dancers generally scoring lower as she is a Duo unit and her BST is treated at 185, which is the same as an armor unit.

Bridal Micaiah is a good unit to round off this team, but her spot can be taken by the bonus unit of the season.

Both of Edelgard's versions perform well in many game modes, and that includes Arena.

Brave Edelgard's Flower Hauteclere allows her to move an extra space and also grants her the ability to move to a space adjacent to any ally within 2 spaces. This gives her mobility not seen in many other armor units, which can enable you to pull off unexpected plays.

Brave Hector's Maltet refine gives him a whopping 5 different skills in one weapon. This makes him not only hit hard, but also gives him durability when paired with Ostian Counter.

Either version of Edelgard or Halloween Hector can be swapped for the bonus unit.

Legendary Dimitri brings his might into infantry teams by not only having high speed and attack, but also bulkiness through his weapon Areadbhar by giving him damage reduction.

Coming with Close Counter built into his kit, Legendary Chrom turns into a difficult to defeat unit, especially since his assist skill To Change Fate! grants him another action, which gives him a lot of mobility.

Valentine's Alm has the bonuses granted by being a Duo unit, as well as an excellent skill in Bonus Doubler 3, which boosts his firepower.

Catherine rounds out the team with as a red unit with the potential to take out any Edelgards that stand against her, but her or Alm's slot can also be occupied by the bonus unit.

These are easily attainable units that can be obtained either through the regular summoning pool as 3★ or 4★, or through Grand Hero Battles and Heroic Grails.

While not possessing any premium skills of their own, these units can score very high thanks to premium fodder and merges.

While the teams listed above are good for scoring high in both offense and defense, you need to keep in mind other factors such as what season is on and the skills they have.

You can, however, pick any unit you like and build them to be your Arena team. With exception of full cavalry teams, you can mix and match different move types and units to see which of them gains you a high score.

Don't be afraid to experiment with your teams and have fun in the Arena!

Post (0 Comments)
Opinions about an article or post go here.
Opinions about an article or post
We at Game8 thank you for your support.
In order for us to make the best articles possible, share your corrections, opinions, and thoughts about "Best Arena Teams" with us!
When reporting a problem, please be as specific as possible in providing details such as what conditions the problem occurred under and what kind of effects it had.