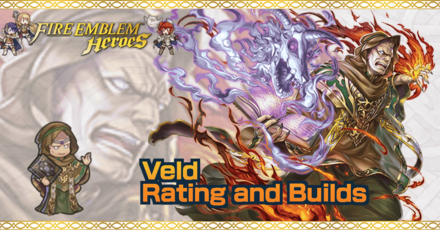 This is a ranking page for the hero Veld - Manfroy's Rock from the game Fire Emblem Heroes (FEH). Read on to learn the best IVs (Individual Values), best builds (Inherit Skill), weapon refinement, stats at Lv 40, and more for Veld.

As a hero obtainable only through Grand Hero Battle, Veld will always have neutral IVs by default. The only way to access IVs for this unit is through using Trait Fruits.

The best IVs for Veld are +Spd and -Def. Veld's Spd is not enough to score consistent follow-up attacks even with this IV, but it will allow him to survive longer as he will take less follow-up attacks. His Def stat is of less importance so it can be safely taken as his bane. You can also go for a -HP IV if you prefer. Though since you can easily get multiple copies of him, it is best that you get one merge at the very least to get rid of the bane.

We recommend a +Spd IV when merging Veld to 10. This is for the same reasons as above. At this point, he can reach 34 Spd which is enough to prevent lots of opponents from scoring follow-up attacks on him. If you prefer a more offensive Veld, you can get a +Atk IV. If you plan to run a Ploy build, you can go for a +Res IV too!

His Spd is a superboon, so you should take advantage of it as much as possible.

Veld's weapon cannot currently be refined. This section will be updated if it becomes refineable in the future!

Velda is a ranged magic attacker (range = 2). Therefore, when not accounting for the Weapon Triangle, the amount of damage he deals will be equivalent to his Atk minus the foe's Res stat.

Defending against Petrify's debuff and Gravity can be hard without prior knowledge! 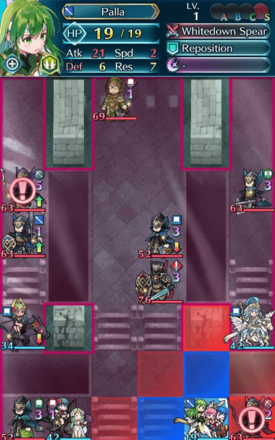 Young Palla in the bottom of the map can only move 1 space and has her Atk/Spd greatly reduced regardless of Veld in the most opposite side of the map from her.

Veld's Petrify carries a very unique effect with a somewhat complex trigger condition. It inflicts a massive -7 Atk/Spd and 【Gravity】 on one foe every turn from turns 1 to 5. This can severly impede a raiding party's success in Aether Raids if they are strategically unprepared. And Summoners know that even 1 small mistake in Aether Raids is very costly. Because it does not require Veld to be near the opponents for the debuff to take effect, even an AI-controlled Veld in another players Aether Keep can mess with players. 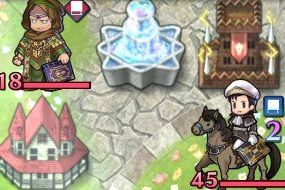 Expect to see lots of Velds in the corners of Aether Keeps! This is how Aversa is used in Aether Raids as the hard-to-reach position allows them to inflict turns worth of debuffs before the enemy finally catches up to them!

Carry this knowledge with you in Aether Raids when raiding against a Veld and work around his strengths.

The C skill Res Opening 3 is a buff skill that gives +6 to the Res of the ally who has the highest Res stat. This skill has good synergy with heroes that make good use of their Res stat such as F!Julia, who heavily relies on Res to tank magic users and to boost her firepower. This buff will be granted regardless of her position on the map.

Additionally, he also inflicts -7 Res in the foe with the bulkiest Res. Like Res Opening, this is applied regardless of Veld's position in relation to the qualified foe. These two Res modifiers combined with Petrify's effect grant Veld the ability to support his allies just by being present in the field!

Can be used as a Res tank

Veld has pretty decent HP and Res stats, and his Spd is not bad either if you take the superboon in Spd, so in addition to being an omni-present support, he can act as a Res tank whose job is to bait magic opponents into attacking him.

This also means that if you stack Res on him through support buffs, it will not only increase his bulk, but it increases the damage he deals through Glacies. You get a lot of incentive from stacking Res on Veld so do not hesitate to do so!

Petrify's debuff does not work after 5th turn

Keep in mind that Petrify does not apply its -7 Atk/Spd and 【Gravity】 after the 5th turn. This greatly reduces Veld's effectiveness in those turns as Petrify is his main gimmick.

Veld's Def only sits at 22 at Lv.40. Be mindful of Veld's positioning in relation to physical units that can easily take him out. His Def stat is not that bad, but if you consider that his Spd is not the best too at 26, he can be easily taken out by a follow-up attack from a sword unit—the most common unit in the game.

Should you Unlock Potential for Veld?

Veld as a Source Hero

Glacies and Chill Res 3 can also be inherited from Veld, but Res Opening 3 is the rarest out of the three. The other two skills can easily be sourced from other units. However, you can only acquire Veld from Grand Hero Battles or from using Heroic Grails, so think carefully before foddering him off.

How to Get Veld / Illustrations / Voice Actor / Quotes

How to Get Veld

Veld is a Hero who, for a limited time, can be obtained through completing a Grand Hero Battle for the first time. They do not appear in regular summons. After the event has ended, they can be obtained by using Heroic Grails.

Register as a member and get all the information you want. (It's free!)
Login
Opinions about an article or post go here.
Opinions about an article or post
We at Game8 thank you for your support.
In order for us to make the best articles possible, share your corrections, opinions, and thoughts about "Veld Builds and Best IVs" with us!
When reporting a problem, please be as specific as possible in providing details such as what conditions the problem occurred under and what kind of effects it had.