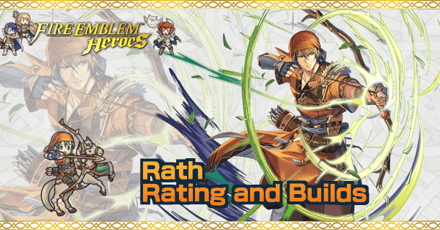 This is a ranking page for the hero Rath - Wright of Sacae from the game Fire Emblem Heroes (FEH). Read on to learn the best IVs (Individual Values), best builds (Inherit Skill), weapon refinement, stats at Lv 40, and more for Rath.

Rath's best IVs are +Spd and -HP. A +Spd IV will make Rath more useful, as he will be able to gain follow-up attacks on a lot more foes. HP is the Stat he needs the least, so it is an ideal bane stat.

If you are building a +10 merged Rath, we recommend a +Spd IV. With 10 merges and a +Spd IV, his Spd reaches 42, transforming him into a very speedy unit. If you are equipping him with a Brave Bow or you just want to focus on the amount of damage he deals per attack, +Atk is a better option for an asset.

Rath does not have an exclusive weapon that can be refined. If you do want to stick with his default weapon, Slaying Bow+, we recommend upgrading it with the +Mt or +Spd upgrade to increase his damage output or amount of follow-up attacks. However, in many cases, you may want to instead equip him with a Brave or Fireswep Bow. For more information on what weapon to give Rath, see the Builds section above.

Rath is a ranged physical attacker (range = 2). Therefore, when not accounting for the Weapon Triangle, the amount of damage he deals will be equivalent to his Atk minus the foe's Def stat.

Since cavalry units can travel three spaces, and bow units have a range of two spaces, units like Rath can threaten foes from up to four spaces away. Except for the times when forests or terrain blocks their path, this type of unit has no issue quickly closing the distance and taking down far away enemies.

Gains a buff with nearby allies

The A skill Spd/Res Form will give him a Spd/Res bonus equal to the number of allies within 2 spaces +1. Since he just needs nearby allies to trigger this effect, it is both easy to use and highly effective.

Inflicts a penalty on the foe's Def

The C Skill Def Smoke will cast a Def penalty on nearby foes after combat. This will allow Rath to take out a foe while lowering the Def nearby foe, allowing another ally to swoop in and finish that foe off.

Rath is a cavalry unit, so he will take 1.5x damage from cavalry-effective weapons, like the ones used by Brave Micaiah or Caeda. Be sure that he stays out of the range of foes with these weapons.
Heroes with Effective Skills

Should you Unlock Potential for Rath?

We Recommend You Unlock Potential for Rath - Wright of Sacae!

Rath as a Source Hero

Rath can be used to inherit Def Smoke 3. However, if you manage to pull a 5 Star unit and you have no particular use for this skill, we recommend leveling and building this unit instead.


How to Get Rath / Illustrations / Voice Actor / Quotes

How to Get Rath

Rath is a Hero who can be pulled from any summon.

Register as a member and get all the information you want. (It's free!)
Login
Opinions about an article or post go here.
Opinions about an article or post
We at Game8 thank you for your support.
In order for us to make the best articles possible, share your corrections, opinions, and thoughts about "Rath Builds and Best IVs" with us!
When reporting a problem, please be as specific as possible in providing details such as what conditions the problem occurred under and what kind of effects it had.