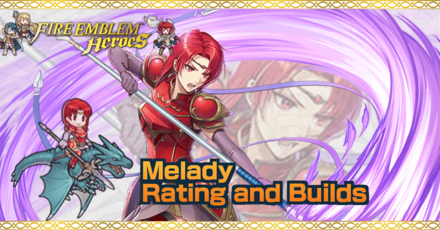 This is a ranking page for the hero Melady - Crimson Rider from the game Fire Emblem Heroes (FEH). Read on to learn the best IVs (Individual Values), best builds (Inherit Skill), weapon refinement, stats at Lv 40, and more for Melady.

The best IVs for Melady are +Atk and -HP. A +Atk IV helps her deal more damage overall. It is also a superboon so you should take advantage of it as much as possible. Her HP and Res are of less importance and both are superbanes, but since her Res is already at an absurdly low level, you are better off getting a -HP IV instead.

We recommend a +Atk IV when merging Melady to 10. This is for the same reasons as above. Combined with her skills, she will reach very high levels of Atk. If you want to specialize in follow-up attacks, you can go for a +Spd IV, but be aware that Instant Lance+ already protects her from half of the follow-up attacks she will be receiving.

If you need Melady to specialize as a physical wall that can inflict huge debuffs using Wyvern Flight 3, you can go for a +Def IV intead and grab an Iote's Shield Sacred Seal..

A multi-strike weapon like Ninja Yari+ will utilize Melady's monstrous raw Atk stat to aim for quick knockouts. You can use a Brave Lance+, but it would make it hard for you to activate Wyvern Flight 3 because of the Spd penalty.

If Ninja Yari+ is not available to you, simply replace Sturdy Blow 2 with the Phantom Spd Sacred Seal. This will put you into a range wherein it would still be easy to trigger Wyvern Flight 3's effects.

This is a very low investment build for Melady. Simply get Spd Smoke 3 and an Iote's Shield Sacred Seal. Iote's Shield is for extra bulk against bow units. Spd Smoke 3 makes it easy to utilize Wyvern Flight 3. However, since Spd Smoke 3 is applied after combat, you would need a refresher-assist unit by Melady's side to fully take advantage of it.

Melady's weapon cannot currently be refined. This section will be updated if it becomes refineable in the future!

Melady is a close physical attacker (range = 1). Therefore, when not accounting for the Weapon Triangle, the amount of damage she deals will be equivalent to her Atk minus the foe's Def stat.

Atk/Def Solo 4 grants Melady +7 Atk/Def during combat when she enters a fight without adjacent allies. This skill is not only very powerful, but it is also very easy to utilize. Because Melady has flying movement, the least limited movement in the game, it will be pretty easy to position her away from allied units.

Can inflict a debuff even on fast enemies

If Melady's Spd is at least equal or higher than the opponent's Spd -10, Wyvern Flight 3, inflicts an Atk/Def debuff on the enemy whose value depends on the difference between their Def stats. Since she has decent Def, and her naturally high Def can be raised further through skills, this skill will be very easy to activate in most situations.

Combined with Melady's ability to block follow-up attacks with Instant Lance+, Wyvern Flight 3 makes her a great check even to the fastest of foes.

Melady's Res only sits at 17 at Lv.40. This makes it easy for magic users to take her out. Be mindful of Melady's positioning in relation to magical units that can easily take her out.

As a flying unit, Melady takes 1.5x damage from bows and weapons effective on flying units. Be sure to keep them out of the range of archers and leave them to other units.

You can choose to get an Iote's Shield Sacred Seal onto her to neutralize this weakness. Check out the builds section for skill builds for Melady! They also contain explanations that help you understand the listed skill compositions.

Should you Unlock Potential for Melady?

Melady - Crimson Rider Only Appears as a 5 Star Hero!

Melady as a Source Hero

Melady can be used to inherit Instant Lance+ or Wyvern Flight 3. However, Melady is a very powerful hero that can provide lots of firepower for your lineups. She also makes for a great addition to your flier teams. Please think carefully before fodderring her off.

You can also inherit Atk/Def Solo 4 off her, but her other skills are currently more unique to her. Please consider your other resources before getting this skill off her.

How to Get Melady / Illustrations / Voice Actor / Quotes

How to Get Melady

Melady is a Hero who can be pulled from any summon.

Register as a member and get all the information you want. (It's free!)
Login
Opinions about an article or post go here.
Opinions about an article or post
We at Game8 thank you for your support.
In order for us to make the best articles possible, share your corrections, opinions, and thoughts about "Melady Builds and Best IVs" with us!
When reporting a problem, please be as specific as possible in providing details such as what conditions the problem occurred under and what kind of effects it had.