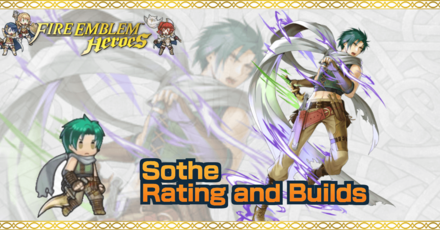 This is a ranking page for the hero Sothe - Zephyr from the game Fire Emblem Heroes (FEH). Read on to learn the best IVs (Individual Values), best builds (Inherit Skill), weapon refinement, stats at Lv 40, and more for Sothe.

The best IVs for Sothe are +Atk and -Res. He has decent Spd so he does not need much of that. A +Atk IV gives him the best chance of taking out units in one turn. It also makes way for inheriting the very useful Poison Dagger+ onto him. With that dagger, he can take out a wide range of infantry units with one hit. His Res is of less importance and thus safe taken as a bane.

This build aims to give Sothe the highest score possible in the Arena with his refined weapon. A budget option if you have no Blue Flame but would like to score the same is Aether, while the rest of his kit has premium skills in order for him to max out his score.

This is a general build using Sothe's refined weapon that can also be used in Aether Raids. Sothe's C skill will differ depending on the team composition you are running. You can run Infantry Pulse 3, Joint Drive Attack, or Fatal Smoke 3 depending on his allies' HP values.
If you don't have Life and Death 4, Life and Death 3 should run fine, or replace it with either Fury 3 or 4. Desperation 3 works if you are running the Fury build.

We recommend the Special Effect Refine for Peshkatz

We recommend getting this refine as Sothe will not only have increased firepower, but will also help himself and his allies trigger their Specials sooner while delaying the enemy team's.

Sothe is a ranged physical attacker (range = 2). Therefore, when not accounting for the Weapon Triangle, the amount of damage he deals will be equivalent to his Atk minus the foe's Def stat.

With Peshkatz's refine, Sothe will grant himself an additional Atk/Spd+4 if his HP is ≥ 25%. This will greatly increase Sothe's one-shot potential.

Can max out his offensive stats

Sothe has the skill Life and Death 3, which grants Atk/Spd +5 and inflicts Def/Res -5. While this will severely affect his defensive capability, this skill can be crucial for high damaging attacks in the player phase.

This is very useful, as he can slow down the triggers of enemy Specials, while accelerating his own and his allies'.

Cannot take much of a beating

Sothe has low defensive stats, and that is made even worse when Life and Death 3 is equipped. One hit from an enemy is usually all it will take to eliminate him. Play to his strengths, and move him around so that he can remain out of the foes' reach and avoid enemy attacks.

Sothe as a Source Hero

Sothe can be used to inherit the skill Life and Death 3. Sothe is one of the few units whom you can get this skill at 4★. Please think carefully before fodderring this skill off to another unit

How to Get Sothe / Illustrations / Voice Actor / Quotes

Sothe is a Hero who can be pulled from any summon.

Register as a member and get all the information you want. (It's free!)
Login
Opinions about an article or post go here.
Opinions about an article or post
We at Game8 thank you for your support.
In order for us to make the best articles possible, share your corrections, opinions, and thoughts about "Sothe Builds and Best IVs" with us!
When reporting a problem, please be as specific as possible in providing details such as what conditions the problem occurred under and what kind of effects it had.