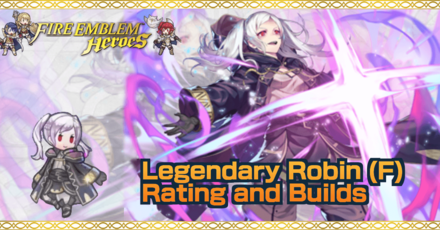 This is a ranking page for the hero Robin - Fell Vessel from the game Fire Emblem Heroes (FEH). Read on to learn the best IVs (Individual Values), best builds (Inherit Skill), weapon refinement, stats at Lv 40, and more for Legendary Robin (F).

The best IVs for L!Robin are +Res and -HP. A higher Res stat allows her to take more damage from magic users, and it synergizes excellently with the effect of Dragonskin. Her HP is much lower priority, so it is safe to take as a bane.

We recommend a +Res IV when merging L!Robin to 10. With a +Res IV, L!Robin's Res stat will reach 29 with 10 merges. With Dragonskin, her Res reaches 33. However, if you value follow-up attacks for a more offensive-oriented Robin, you can use a +Spd as base instead.

Legendary Robin's Exclusive Weapon currently cannot be refined. This section will be updated if it becomes refinable in the future.

L!Robin is a ranged magic attacker (range = 2). Therefore, when not accounting for the Weapon Triangle, the amount of damage she deals will be equivalent to her Atk minus the foe's Res stat.

Legendary Robin is an Earth-Type Legendary Hero, and when summoned, you will receive an Earth Blessing. During Earth Season, allies who appear in a team alongside L!Robin will gain HP+3 and Spd+3 when they have been given an Earth Blessing.

L!Robin's Dragonskin neutralizes the effects of weapons that are effective against flying units. It also grants her a +4 Def/Res whenver a foe initiates combat on her. These factors compared with her decent defensive stats and her colorless attribute make her a very strong unit in the enemy phase

Can Counterattack Regardless of Range

Expiration allows L!Robin to counterattack all enemies regardless of range. This adds to her excellent tanking ability in the enemy phase. Furthermore, it also calculates damage based on whichever defensive stat, Def or Res, of the enemy unit is lower allowing you to exploit units with imbalanced defenses.

Weak to Weapons Effective on Dragons

As a dragon unit, L!Robin takes 1.5x damage from weapons like Falchion. Be aware of the weapons that your enemies have and adjust the strategy around L!Robin accordingly.

Stats Are Too Balanced

L!Robin's stats may be well balanced, but this makes it hard for her to fill very specific niches. In order for her to shine a little bit more, you should integrate buffs from other allies into your strategy around L!Robin. Great examples include Hone Fliers and Atk Tactic 3. Skills that buff Atk and Spd solidify her role as an enemy phase unit by making it easier for her to take down foes and not just chip away at their health.

Cancel Affinity 3's effects is very limited as it is only effective against foes with the mentioned Raven Tomes and Nagi's Ethereal Breath. Consider swapping out this skill with a more useful one if you do not expect foes tha have an advantage against colorless units.

Should you Unlock Potential for Legendary Robin (F)?

Robin - Fell Vessel Only Appears as a 5 Star Hero!

L!Robin can be used to inherit the skills Cancel Affinity 3 and Res Smoke 3. However, L!Robin is a powerful and valuable legendary hero who can lead your team in the Arena. Because of this, we recommend training and building L!Robin instead.

How to Get Legendary Robin (F) / Illustrations / Voice Actor / Quotes

How to Get Legendary Robin (F)

Legendary Robin (F) is a limited time Hero who can be pulled from a Legendary Hero Summoning event. They do not appear in regular summons.

Register as a member and get all the information you want. (It's free!)
Login
Opinions about an article or post go here.
Opinions about an article or post
We at Game8 thank you for your support.
In order for us to make the best articles possible, share your corrections, opinions, and thoughts about "Legendary Robin (F) Builds and Best IVs" with us!
When reporting a problem, please be as specific as possible in providing details such as what conditions the problem occurred under and what kind of effects it had.